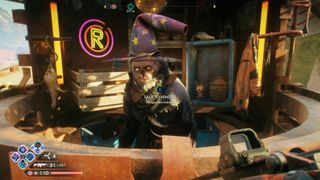 Remember cheat codes? You know, like the ones you used to have to punch into a game to make cars fly, or inflate the heads of your NPC brethren? Well, they’re back! In a roundabout manner, Rage 2 has cheat codes, and they range from useful to completely absurd.

Unfortunately, the route to unlock them is dark and full of terrors. Fortunately for you though, we’ve put together a guide to help smooth out the process. Get nostalgic with us as we list the Rage 2 cheat codes we know of so far, and lead you through the peculiar process to unlock them.

How to find the Wasteland Wizard in Rage 2

This is where it gets fairly tricky. To unlock and activate cheat codes, you first have to find the Wasteland Wizard. His name is Mangoo the Unborn, and he rides around in a vessel suspended by three balloons. Also, he can be in a variety of locations on the game map and will never just stay in one place.

Mangoo is incredibly difficult to pin down, and worst of all, there’s no rhyme or reason to his movements. All we had to work with was hearsay from other players, and even then, it took some time to find him. Yet, even when we found him, he wasn’t even exactly placed where we was told to look, so it appears to be a total mystery as of right now.

We found Mangoo the Unborn just west of the Eden Space Centre, where one of the game’s main missions takes place. It’s the staging post for Dr Kvasir’s first quest so it won’t be long until you find it on your map.

Mangoo was parked out on a dusty mesa, alone and warbling. Remember the three balloons, as this is the main signifier. Once you find those, you’ve caught him. If you spawn the Icarus vehicle (unlocked by advancing Dr Kvasir’s tree to level 7) you can fly around looking for them.

Here is a short list of other places where Mangoo can be, denoted by region. The best practice is to fly around on the Icarus vessel and frequent these places until you get him.

The Wilds - in the top-right portion of the map you’ll find a riverbed with islands in the water, Mangoo can appear on one of those.

Sekreto Wetlands - at the west-most ridge of the map you can find him hiding on a small islet. Ride up the coast in your Icarus vessel.

Broken Tract - find the Bandit Den map marker in the south portion of this region and he should be nearby in the mountains.

How to purchase cheats in Rage 2

Now you’ve found Mangoo, simply approach him. He’s a vendor, but not the normal kind. You can spend your hard-earned cash on some cheats that will be activated in-game via the settings menu. You want to purchase them all when you find him so you don’t have to go through the trouble of pinning him down again, so make sure you save up your cash before you head over.

Here’s a list of the known cheats as of right now, and what they do:

Diamond Geezer - when activated, your gameplay will be narrated by cockney hardman and British national treasure Danny Dyer.

He’s on Fire - Tim Kitzrow of NBA Jam fame will provide the transcript to your chaotic gunplay.

Git Gud - all enemies will only take one hit to kill when you activate this cheat.

Son of Thor - this cheat lets you redirect lightning to your foes, turning you into a Norse god.

Phoenix Rejector Seat - your car will shoot off into the sky (instead of you) when you leave the vehicle.

Progress Booster - doubles your Feltrite intake for four hours, so you can farm upgrades.

Klegg Support - summons Klegg Clayton to your side, who is usually antagonistic towards the player?!

Super Wingstick - uncaps the redirects on your fancy boomerang, turns it into a killing machine.

Red Barrel Rain - spawns a rain of hellfire (made out of red barrels) in front of the player.

Bare in mind, cheats disable achievements or trophies. That is until you quit the game and load back in to restore normality. Regardless, be careful! Try not to pop achievements and progress the story whilst they’re activated, or you’ll be sorry.