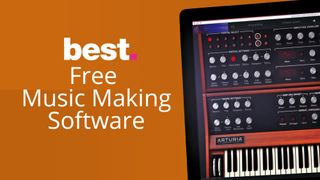 Free music-making software is a great idea if you like the sound of getting musically creative on your computer without the financial outlay. Programs designed to help with the music creation process can be outrageously expensive, but they are the sot of tools that people use to make a living. That said, there is an impressive selection of free music-making software out there that will serve as a great introduction to what's possible without putting a strain on your pocket.

You might be surprised at the quality that's to be found here. Given the price tags often attached to music production software, you'd be forgiven for expecting free tools to cut too many corners to make them worth bothering with. Thankfully, opting for free music-making software need not mean making huge compromises.

In this roundup of free music-making software, we take in tools that are suitable for beginners, as well as those more suited to those who are more seasoned. The selection spans Windows, macOS and Linux, so you'll find something to help you with your creative ventures no matter what platform you're using.

Apple’s long-standing digital audio workstation has come a long way since we first saw it in 2004, and although it still lacks a couple of key features (such as MIDI export and the ability to control external hardware via MIDI), GarageBand offers more than enough to get you going.

Apple has done a very good job at creating the perfect gateway drug into music production, and a clear path to Logic Pro X (Apple’s fully-functional professional DAW) is plain to see.

Shared features include Drummer, the seriously easy to use groove-maker, which includes multiple genres styles, easy controls and a ton of pattern and fill variations. You’re also treated to content from the Apple Loops sound library. And to further ease the transition, a familiar interface to Logic.

Although limited to 255 tracks per song, GarageBand is an immensely powerful and easy to use DAW that seems to be getting better with age.

The folks at Tracktion seem to have hit on a rather canny business model by releasing older versions of their DAW for free, with nothing taken out.

The convention seems to be to make the version two iterations before the current one available to download without charge. You might not get all the latest features, but you'll receive an update each time the company updates its flagship DAW, which it does almost yearly.The latest version to have its price tag shaved off its Tracktion T7.

Every section is scalable, so you can adjust to suit your workflow and the bottom panel changes to to display whichever parameters you've selected elsewhere on the screen.

Tracktion T7 also features an unlimited number of audio and MIDI tracks, all depending on your hardware capabilities of course, and is able to host multiple plugin formats including VST and Audio Units.

Note that Before you can download the software, you’ll be prompted to enter an email address and password to create an account. When you run the software for the first time after installing it, you’ll see a notification that it’s running in demo mode, but don’t worry – click ‘Unlock…’ then enter the address and password you set earlier, and all the features will become available.

There’s plenty to keep any guitarist happy when recording directly into their laptop – not least the fact IK Multimedia has secured official guitar amp models from such giants as Fender, Ampeg, Orange, Mesa Boogie and many more.

AmpliTube's tones are authentic and there's an impressive level of customization available (including choice of microphone and mic placement), but perhaps the biggest boon is the Custom Shop feature.

Okay, so at this point you're going to have to start shelling out some cash if you want to expand your collection of amp models, stompboxes and cab sims. However, the 'try before you buy' scheme is a welcome one.

Klevgrand may not be a household name, but the Stockholm-based production company has certainly carved a name for itself with a slew of fine-sounding instruments featuring some rather esoteric interfaces.

SyndtSphere is no exception, and is one of the more accessible software synthesizers out there. Loaded with over 70 presets, the big fun here is the way you can morph between sounds using a nifty sphere-like object at the centre of the app.

More seasoned producers needn’t be be put off by the beginner-friendly feel; SyndtSphere has an impressive array of sounds lurking within. The unique morphing function allows for some rock-solid sound design, but you may find yourself playing around with it for ages before getting anything done.

Cakewalk – formerly known as Cakewalk SONAR, was one of the first ever digital audio workstations, but its owner Gibson halted development last year. Luckily for music makers, cloud music creation platform BandLab snapped the software up in February, and has made it available to download free.

Cakewalk is a complete music production package, with creative songwriting tools and instruments, advanced mixing and mastering tools, unlimited MIDI and audio tracks for your own recordings, and a full suite of editing tools. Once you've finished, you can publish your work directly to SoundCloud, Youtube, Facebook and many other sites.

It's a pity it's only available for Windows 10 at the moment, but we'll be interested to see where BandLab takes Cakewalk in the future.