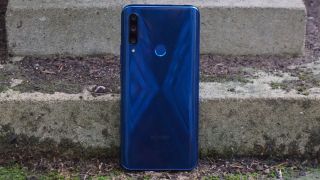 Honor ended its 6-month long break from launching smartphones in India with the mid-range Honor 9X. The stage was also shared by the MagicWatch 2 and the Band 5i.

Before we talk about the product specifics, let’s address the elephant in the room. Yes, the Honor 9X runs full-fledged Android with EMUI on top. While it made its way out of China only recently, it was technically cleared for sale before the US trade ban impositions came into play. This also means that the Honor 9X should receive future Android updates. It was probably the last phone from Huawei consumer group to be eligible to ship with Google services on board.

The Honor 9X was initially announced in China in July 2019 as the company’s latest mid-ranger. The Indian variant is powered by the octa-core HiSilicon Kirin 710 chipset and the Mali-G51 GPU. For context, the Kirin 710 was announced in mid-2018. Other specifications include 4GB of RAM and up to 128GB of storage.

Design is a strong point for the Honor 9X and is one of the cheapest full-display, no-notch smartphones available in India. We get a 6.59-inch IPS LCD with a Full HD+ resolution. The fingerprint scanner is located on the back, right beside the triple-camera setup. It consists of a 48MP f/1.8 camera with a 1/2-inch sensor, an 8MP ultrawide camera with a 120-degree field-of-view, and a 2MP depth sensor. The front camera is a 16MP pop-up unit.

A more affordable version of the recently-launched Honor Band 5, the Honor Band 5i sports 2.43cm touch display with a dedicated home button. It can track nine different exercises, such as running, cycling, rowing, etc.

There’s also a 24x7 heart rate tracker along with blood SpO2 level monitoring. TruSleep also tracks your sleep and provides suggestions on how to improve sleep quality. Other features such as alarms, notifications, music control, and idle alerts also make the cut. Honor claims it has a battery life of up to 7 days on a single charge.

Another connected device powered by the Kirin A1 platform, the Honor MagicWatch 2, is available in two sizes with round dials — 42mm and 46mm with AMOLED displays. They are quoted to have a battery life of 14 days and 7 days, respectively. It also natively supports GPS, which can be used for outdoor activity tracking. There are also trackers onboard for sleep tracking, heart rate monitoring, and stress levels.

Interestingly, the upcoming Honor Sport Bluetooth earphones were also unveiled, priced at Rs 1,999, with the Pro variant priced at Rs 3,999.