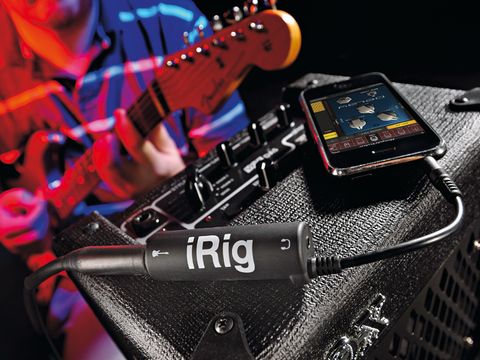 Relegate your guitar amp to coffee table status and use your iPhone instead!

The IK AmpliTube iRig is a hardware and software combination that turns your iPhone/iPad/iPod touch into a fully featured guitar amp complete with effects pedals.

Just plug the iRig device into your iPhone's 3.5mm stereo headphone minijack and the other end into your guitar, using a standard guitar cable. There's another 3.5mm port on the iRig for you to attach headphones.

Then, using the AmpliTube app (the basic version of which is free, but you pay to add more pedals) you can listen to your guitar with a variety of different effects, such as Chorus, Delay and Wah, or through different types of amp – Lead, Bass and Crunch. It's all great fun.

The dials on each effect pedal can be adjusted endlessly, and combined to form many variations (you can have up to three effects applied simultaneously). The app itself looks great and is intuitive to use.

The buttons for switching pedals are a little small to hit accurately on the iPhone's tiny screen, but are much easier to use on an iPad. The effects themselves sound fantastic, and produce a variety of rich tones that sound just like the real thing.

You only get three effects for free, so factor in buying more via in-app purchases or by getting the full AmpliTube app (£12).

The iRig is a great idea. Just plonk yourself down on the sofa with your iPhone and guitar, pop your headphones on and you've got a complete guitar setup without needing a bulky amplifier and peddles all over the floor.

The concept is let down only slightly by the obvious problem that you have to stop playing to touch your iPhone for a change of effect, which interrupts your musical flow somewhat. Unfortunately you can't plug the iRig directly into your Mac's line-in port for recording in GarageBand (a USB microphone is required), but to be fair, IK Multimedia makes a separate product for use with your Mac.

The iRig works brilliantly for both guitars and bass though, and if you're a guitarist there's an endless amount of fun to be had here.