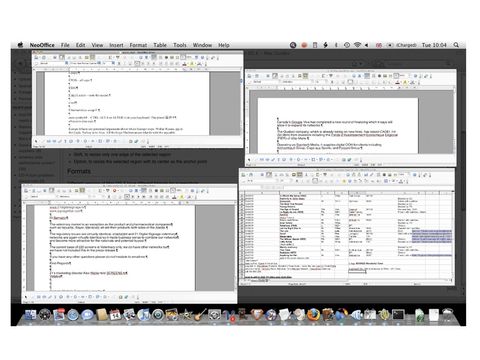 Fantasktik previews all windows from a specified application only

Fantasktik helps you move between docs, but few will really need it

Fantasktik 1.4 adds a new toolbar to the top or bottom of your screen, showing open applications and documents.

It's easy to manage via System Preferences, and both its behaviour and appearance are as configurable as anyone could want. The question is whether this utility is actually useful.

Fantasktik comes into its own when you have lots of documents open in one application. Rather than selecting the app in the Dock and then finding the document in the Window menu, you can get a quick preview of any open document with a single click and make it active with another, or see previews of all an app's open documents at once. You can also hide and quit apps, and lots more.

QUICK VIEW: Fantasktik allows you to quickly view all the documents you have open within an app

The configurability is nice too. For example, you can auto-hide Fantasktik after a designated number of seconds, stop it displaying certain apps, and hide it when specified apps are active. And the taskbar doesn't consume much screen space, though sometimes – as with too many utilities – it can sidle in and out of view.

One feature we would like to see in a future version, which would increase Fantasktik's contribution to productivity, is an option to display recently-used documents as well as those currently open.

In the meantime, it could be handy for users who regularly have many files open and are constantly moving from one document to another. The rest of us will find Fantasktik unnecessary and a little fiddly.