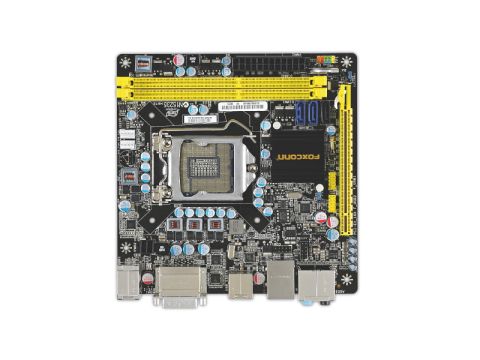 Intel Sandy Bridge performance in a puny package is an awesome idea, but this board needs some fine-tuning.

Intel's new Sandy Bridge processors are stupidly, impossibly, hilariously quick. By some metrics, they're the most impressive new CPUs in memory. However, one of the downsides is the requirement for a new motherboard. Still, if you're going to make the migration to a new Sandy Bridge system, why not consider a small-form-factor board, such as the Foxconn H67S?

As the name suggests, the Foxconn H67S is based on the new H67 chipset and therefore supports the heavily revised integrated graphics core that appears in each and every Sandy Bridge CPU.

The new core is available with either six or 12 execution units, respectively known as the Intel HD Graphics 2000 and 3000 models. It's by far the best integrated graphics chip we've ever seen in terms of 3D performance, and also offers an impressive 2D feature set including HDMI 1.4 video out and support for Blu-ray stereoscopic 3D.

Of course, this tiny mini-ITX motherboard also works with discrete graphics through a 16-lane PCI Express port. And don't forget, all Sandy Bridge processors come with the intriguing Quick Sync Video transcode engine that promises to make mincemeat of those tedious video conversion jobs. The potential for massive power in a puny package is utterly compelling.