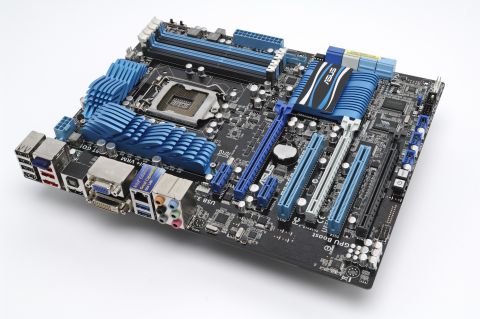 The Z68 is all the best bits of the Sandy Bridge architecture, and the P8Z68V Pro displays it all for a decent price too.

We've been looking forward to the Intel Z68 platform since we first played with the Intel Sandy Bridge platform, and now it's here in the shape of the Asus P8Z68V Pro.

When Intel released its new generation of processors in January they were met with general applause and excitement. The champagne flowed, party poppers flew everywhere - ah, good times.

The Sandy Bridge processors, like the Intel Core i5 2500K and the Intel Core i7 2600K, are super-quick, suited to video transcoding and tread encouraging new ground in the muddy field of integrated graphics.

The improvements over the Lynnfield, and even some Bloomfield, chips are dramatic in terms of performance if not architecture - super-fast integrated memory controller, lower L3 cache, and greater efficiency thanks to a decoded Cache that grabs instructions the instant they're decoded - and can also hack a greater instruction bandwidth than its predecessors.

The real-world performance of Sandy Bridge all but surpasses Intel's top of the line Gulftown chip - the Intel Core i7 990X Extreme Edition.

Unlike the 990X EE, the price tags are also real-world, around £500 separating the most expensive Sandy Bridge CPU and Intel's flagship chip.

In the months since Sandy Bridge's release though, the champagne has given us all a headache and the party poppers have left a gunpowder smell in the air that's making us feel sick. The H67 and P67 motherboards that support the new CPUs have been adequate at best, and at worst frustrating and physically harmful to our systems.

The biggie for the Intel Socket LGA 1,155 P67 chipset was a design error that caused potential long-term damage to devices attached via SATA 3Gbps.

The dodgy SATA controller provoked a massive recall by Intel, and though they identified the issue before systems started exploding or anything, the recall stunted SNB upgrading while everyone waited for Intel to release the B3 revision of the chipset, like the Asus P8P67 Pro B3, a board that doesn't chew up our SATA devices.

It also distracted upgraders from other issues with the H67 and P67 boards. Issues caused by conscious decisions by Intel rather than oversights.

That was until the release of this the Z68 chipset, here in the guise of the Asus P8Z68V Pro, will, Intel hopes, eradicate all grumbles with 6 series boards.