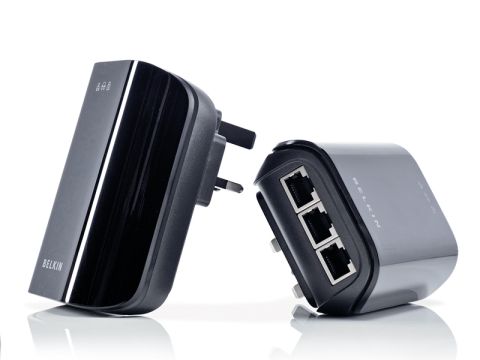 A clean and easy way to connect your kit to your home network, but not the fastest we have seen

The number of network-capable gizmos under the average telly is rapidly expanding. If you're particularly flush, you might have a games console, an internet TV, a set-top box, a DVR, a media-centre PC, a NAS drive and a Blu-ray player. Most of these devices don't include Wi-Fi, so how are you meant to connect them?

Enter Belkin's Share Powerline AV 3 Port. This network kit comprises two plugs, one of which includes three Ethernet ports. This means you can connect the first to your router, and the second to up to three devices (although Belkin has only included a pair of CAT5 cables).

Unlike the Netgear AV+ 500, there's no pass-through on the plugs themselves, which means they'll have to take up a power socket each. They're good-looking adaptors though, and they'll complement an expensive home cinema setup. Belkin recommends that they're plugged directly into the wall rather than an extension socket, but we experienced no problems when we did so.

Security is covered by 128-bit AES encryption out of the box. It all works perfectly as soon as you plug it in, but Belkin recommends that you update the firmware first.

In spite of this, speed was a letdown, especially compared to Netgear's offering. Belkin promises a 200Mbps connection, but in our tests we were only able to achieve 100Mbps. Add extra devices and the speed drops further. It's still faster than your average Wi-Fi connection, but it's disappointing.

We can't help but question the price too. You could buy an ordinary powerline network kit for less than £40, then bung a £15 network switch on one end and achieve the same result, albeit a bit less tidily.

If you're after a neat way to connect a multitude of appliances to the net, look no further. Just don't expect lightning-fast connection speeds.