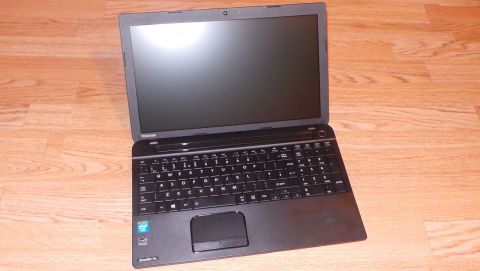 It's far from perfect, but this notebook makes a solid case for itself as a budget offering, despite portability and battery life issues.

Toshiba announced back in September 2014 that it was backing off certain consumer markets to focus on the more lucrative business ones. While that means that its Qosmio, Kira, Chromebook and Satellite brands might fade over the next 12 months, other brands like Tecra, Portégé and Satellite Pro might survive the cull.

The latter sub-brand is the one that is likely to be the mainstream affair for Toshiba, the type of laptop that will find its way to small and medium businesses or individuals looking for an affordable, traditional laptop. That's where today's Satellite Pro C50-A-1MM comes in.

(Note that this review unit was provided by eBuyer but has since been discontinued. The next cheapest stores where we could currently source them are BHSdirect and DebenhamsPlus for £235 – around $335, AU$455 – including delivery).

We reviewed the C50D-A-13G earlier this year and both models have a lot in common. It is essentially the same chassis with the only notable difference being the Pro moniker used – the latter indicating that it is a business laptop, albeit an entry-level one.

The design is still the same, "matte" being the style, and the word "prosaic" comes to mind when describing the C50. It has the same patterned design on the palm rest and the rear cover as its predecessor (Toshiba calls it hairline) and the charcoal-coloured chassis is plastic all over.

Toshiba clearly hasn't updated the product design noticeably for the last few years or so. If like me, you've been used to handling Ultrabooks over the last five years, this one will come as a bit of a shock. It weighs in at 2.3Kg (that's just over 5lbs) and is up to 33.4mm thick (1.3-inch), that's more than twice the thickness of even the thicker Ultrabooks on the market. The C50 is also 38cm long and 24.2cm wide (15 x 9.5-inch).

Behind its utilitarian looks, however, lies a sturdy workhorse – it feels tough and is solidly built. Regarding the keyboard, the keys are flat-topped ones and were comfortable enough for some light work, albeit slightly mushy. There are also some weird design decisions here (as is too often the case with Windows laptops). The arrow keys are ludicrously tiny, the function keys are arranged in groups of four, while the HEP (Home, End, Page Up/Down) keys are located above the numeric keypad.

I personally don't like the touchpad because its texture tends to make my index finger feel slightly numb (that could just be me, though). It is definitely not smooth; bonus points however for the two touchpad buttons.

The DTS-powered speakers are conveniently located under a grilled surface above the function keys rather than under the palm rest as is frequently the case. Next to them is a large power button that lights up when on.

The screen panel is surrounded by a fairly thick bezel with an HD camera on top. It's a standard, non-touch, 15.6-inch model with a 1366 x 768 pixel resolution with no discernible distortion or artefacts.

On the front are three status lights and a card reader. On the left you'll find the power connector, a USB 2.0 port and an empty optical drive bay, while on the right, there's an air vent, a legacy D-sub connector, a 100Mbps Ethernet port, another USB 2.0 plus a USB 3.0 port, two audio inputs and an HDMI out connector.

Wireless connectivity extends to Bluetooth 4.0 and 802.11n single-band Wi-Fi, both courtesy of a Qualcomm Atheros chip.

Underneath the laptop is a flap that hides the memory slots (only one is populated with 4GB of DDR-3-1600 RAM), the CMOS battery and a 500GB hard disk drive (a HGST model with 8MB cache spinning at 5400RPM). As for the battery, it is a 48Whr model.

This particular processor is based on Ivy Bridge and is three generations old (before Haswell and Broadwell), but despite this it performs significantly better than Bay Trail parts which are replacing it inside entry-level laptops.

The two downsides are that it produces more heat (less of an issue with a laptop of this size) and uses more power (i.e. shorter battery life).

The C50 is more powerful than many of its similarly configured competitors, helped by its Ivy Bridge DNA. It scored 1725 on the PCMark 8 Home benchmark which isn't that far off the AMD-powered C50 (1811) and trounces what the Asus X200 scored (1271).

Its 3DMark scores, however, are dismal, making for some of the lowest totals we've seen for a long time. Likewise its Cinebench R15 score was equally poor; the C50 even failed to run the GPU test.

What this means for casual users is that Toshiba's entry-level work laptop is only suitable for games (on low quality settings) and standard office applications (remember, it's a business laptop after all).

As expected, the C50's battery life score on PCMark 8 was dismal with an expected battery life of 2:47, which precludes its use as an out-and-about work machine.