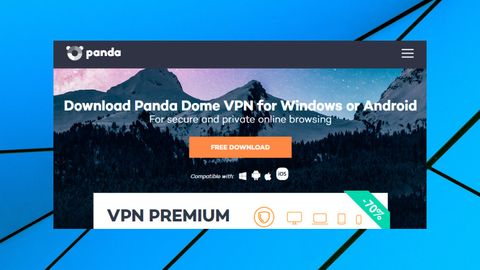 An appealing addon for existing Panda antivirus users, fast, great value and easy to operate, but not enough power or features for everybody else.

Panda Security is best known for its antivirus and internet security products, but like Avast, Avira, Bitdefender and other security companies, in recent years it's extended its lineup with a VPN.

The service is bundled with Panda's Dome antivirus and security product. You don't have to pay extra for this - a basic version is included for free - but it means you probably won't be able to use the VPN with another antivirus product, as the two are likely to conflict.

The VPN is more about ease of use than features and functionality. It has only 23 locations, very basic desktop and mobile apps, and there's no choice of protocol, no kill switch, no settings at all beyond a simple 'automatically connect to the VPN when my PC starts.'

It's not all bad news. The VPN is very easy to operate. It supports up to five simultaneous connections. And it's based on the excellent Hotspot Shield, a powerful service which we've found generally delivers excellent speeds.

Panda VPN is also available as a free version, although this limits you to a tiny 150MB data allowance a day, and doesn't give you any choice of location (the client automatically chooses the fastest server for you.)

It comes as a part of Panda Free Antivirus, too. This delivers reasonable Windows protection, but doesn't have real-time antivirus for Mac and Android devices. (The Panda site has a comparison table which tells you more about what Panda free includes, and what it doesn't.)

If you're not interested in antivirus, you might be better off with Hotspot Shield's free edition. This has some ads, but also gives you 500MB of data a day.

But if you're a fan of Panda Security, or just looking for a cheaper way to access Hotspot Shield, Panda VPN could be worth a try.

Buying the stand-alone VPN is more difficult than we expected - even the client 'Upgrade to Premium' button points us to the purchase page for the full Panda Dome security suite - but eventually we found the right website page.

Once we'd tracked the product down, everything else was straightforward. We chose a billing frequency (1, 12 or 36 months), entered our email address, selected our preferred payment method (Panda supports cards and PayPal) and handed over our cash in the usual way.

Panda emailed us an activation code and a download link. We grabbed the installer, entered the code when prompted, and a minute or so later, Panda Free Antivirus (along with our premium VPN) was up and running.

Panda VPN arrives as a part of Panda's free antivirus, which makes the interface a little bulkier than usual.

There are buttons to launch on-demand scans, for instance, or schedule scans to run when it's convenient.

A USB Protection tool 'vaccinates' USB keys to try and prevent them being infected by autorun malware.

An excellent Process Monitor tool acts like a supercharged Task Manager, enabling experienced users to check out running processes and try to understand what they're doing.

And a handy Rescue Kit can build a bootable rescue USB key to boot and clean up an infected PC.

Is this worth having? Maybe. AV-Comparatives' Real-World Protection Test July-October 2019 summary report placed Panda 7th out of a field of 16, with a protection rate of 99.6%. That's not amazing, but it's similar to some big names (Bitdefender managed 99.7%) and better than several others (Avast and F-Secure hit 99.3%, Kaspersky a disappointing 99.1%.)

This is a review of Panda VPN, though, not the antivirus. Despite the extra complexity on the main screen, Panda's VPN is only a click away, and that presents you with a far more familiar and straightforward interface.

Panda's VPN app works much like every other VPN you've ever used (though probably a little simpler.)

There's a list of locations, with an 'Automatic' option enabling the app to automatically choose the fastest server for you (that's the nearest, usually.)

There's a button to tap which gets you connected, and disconnects when you're done.

There's a mostly blank Settings box, which only includes an option to automatically connect when Windows starts, and the location to use.

If you're thinking that's basic, you'd be 100% right. There are no hidden depths here. The location list doesn't include ping times or server load figures, for instance. You can't filter it by continent. There's no favorites system, or 'Recent Connections' list. It's not even in alphabetical order, that's how little thought seems to have gone into the app (the list begins Germany, Norway, Hong Kong, Russia, India...)

The app does at least connect very, very quickly (around a second - other VPN apps can take more than ten seconds), and displays a desktop notification to tell you when you're protected. But there's no notification when you disconnect, which could be a problem if the connection drops. Especially as the app doesn't have a kill switch to protect you.

We connected to the VPN, then terminated one of Panda's system processes to forcibly close the connection. Not only did Panda VPN fail to raise an alert, it didn't even realize the VPN had dropped, and the interface continued to tell us we were connected.

Terminating a process is a fairly drastic test, and not something that's likely to happen often in real life. But just the fact that it's possible - that the Windows app might tell you you're protected, when you're not - has to be a major concern.

Sounds great! But is it actually true?

We connected to the UK server and tried accessing BBC iPlayer, but the site detected our VPN and told us, sternly: 'this content is not available in your location.'

Maybe we'd have more luck with US Netflix? Nope.

How about Netflix in the UK, Canada, Japan? No, no, and no, respectively.

Panda VPN may get you into other, less well defended services (we were able to view US-only YouTube content, for instance.) But if that's a top priority for you, test your target sites with the free VPN plan before you buy.

To assess VPN performance, we use the benchmarking sites SpeedTest and TestMy to measure download speeds from UK and US test locations.

Our UK results were probably as consistent as we've ever seen, with median speeds ranging from 66.58 to 67.5Mbps on our test 75Mbps line. That's fast, too, barely 1-1.5% down from our results with the VPN turned off, a tiny overhead (we normally expect to see a 3-6% reduction.)

Our US test location managed 460-470Mbps with the VPN turned off, giving a great opportunity for Panda VPN to show what it could do. And although there was more of a reduction in speed, the service did very well, with an overall range of 169-295Mbps and a median speed of 276Mbps.

Coming up with a meaningful measure of VPN speed is a challenge at the best of times, but this is a close match for related tests. For example, Panda uses Hotspot Shield underneath, and our last Hotspot Shield test achieved a very similar median speed of 261Mbps.

This isn't quite the fastest we've seen - Private Internet Access' results ranged from 314-453Mbps with a median of 357Mbps - but it's far, far better than most, and great value for the price you're paying.

Panda VPN is a great add-on to Panda antivirus: it's fast, cheap, and even total VPN newbies will be using it in seconds. The Windows app telling us we were protected, when the connection had dropped, was a concern, though, and the lack of features and bundling with Panda antivirus makes it a poor choice for general VPN users.