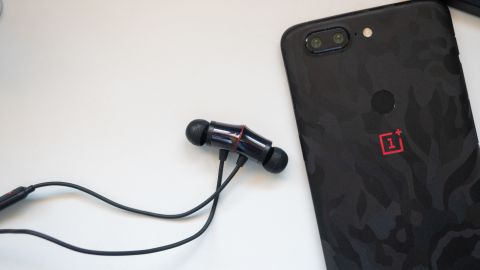 The OnePlus Bullets Wireless deliver bright audio, and does punch slightly above its weight. It has average build quality, but is definitely worth considering if Rs. 4000 is within your budget.

It's the "one more thing" OnePlus had at its event. The Bullets Wireless is the company's first attempt at wireless audio, and an evolved form of the Silver bullets it once used to sell. And like every OnePlus product, it tries to strike a balance between affordability and performance.

At just under four thousand bucks, though, the Bullets Wireless have some tough competition to deal with. They won't lock you into some future OnePlus ecosystem, but if you do buy them, they'll tell you why this company has progressed to where it is today.

For wireless audio in India, this price range is a tad difficult to traverse. From a consumer point of view, it's not particularly cheap, but it's not exorbitant either. Yet, you don't want to spend Rs 4,000 on something that doesn't suit your audio experience.

The Bullets Wireless won't suit all your audio needs, but it's easy to make this your default travel headphones of choice. There's plenty of audio detail (for the price) to go around, and a hint of warm bass in the background, but mids and highs are where this one truly excels.

I've spent hours listening to DJ Snake's Magenta Riddim on these. The Bullets complement the song's tempo by providing enough audio detail to keep you engrossed and swaying to the music.

On the other hand, the claps in KNAAN's Waving Flag (the football version) aren't very well pronounced, while the drums at the beginning sound somewhat tinny. In the chorus, you'll notice very good detail in KNAAN's vocals, but the drums and other instruments are somewhat muddled. Overall, it still keeps the music impactful, but you know you didn't buy the absolute high-end here.

Of course, OnePlus was never going for high-end audio with this one. The mission was to deliver good audio at an affordable enough price, and at that, it's mission accomplished.

Continuing with the audio experience, you'll hear the slight beats that come as Michael Jackson asks "Annie are you ok" in Smooth Criminal.

The footsteps in Thriller drift away from you and the wolf-howls do seem like they're coming from somewhere far away.

The audio experience on the Bullets Wireless is complemented by its battery life. It charges through a USB Type-C port and uses OnePlus' Dash Charge feature. On a single charge, you can easily get about nine hours of battery life.

I used the Bullets Wireless as my primary on a recent trip to Singapore. I put on the headphone at around 8PM, and it lasted me through till 5AM. Bigger, over-the-ear headphones often do better, but this is near the higher-end for in-ear wireless neckband type headphones.

The Bullets Wireless obviously connects to your phone via Bluetooth. But OnePlus also has a magnetic connection feature here.

The buds come together through a magnetic connection. So whenever you take them off the ear, the magnets pull the two buds together. This, automatically disconnects them from the phone you're using, and the music is paused. If you put them back on, the music will start playing from where you last left it.

Note: The music will auto resume for the OnePlus 5, 5T and 6 only. It’s also worth noting that the music doesn’t auto resume if you happen to manually swipe away your music app or use more than one music app at a time.

The Bullets Wireless also have in-line controls, allowing you to control the volume and take calls. There's a circular button in-between the volume controls that can be used for taking calls. If you long press this button, it will trigger Google Assistant or Siri, depending on what phone you're using.

With its inline controls and mic support, the Bullets Wireless can also act as a hands free. This works as long as you're in silent rooms, but I did get noise complaints from people on the other end whenever I was outdoors.

On the other hand, audio on calls was clear on my end. And the mic picks up your voice well too, along with all the other noise. My callers complained about noise, but said they could still hear me clearly enough for a quick chat.

The only real compromise you see in the Bullets Wireless is in design. The build is mostly plastic, with a glossy finish on the buds themselves. While I wouldn't call it a 'cheap' finish, it doesn't feel particularly premium either.

The neckband is rubbery and flexible, which allows you to stash the headphone inside the silicone case if needed. But that build also makes them light and easy to forget when they're around your neck.

Overall, the Bullets Wireless look good in photos, and they look good in reality, but they don't have the premium feel as far as design is concerned. And that's not something that I personally worry about when the audio quality and other features are well tuned.

In many ways, the OnePlus Bullets Wireless is like the OnePlus 6. The goal here is to give you above average audio quality but at a more affordable price. And OnePlus has certainly been successful with that.

If you're looking for wireless neckband style headphone in this price, this may be worth a consideration. It's meant for those who prefer bright audio and can't spend over Rs 4,000.