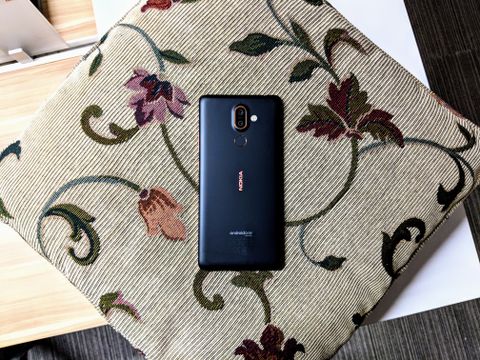 Great battery life, immersive display, solid design, and software at its purest, that's the Nokia 7 Plus for you. But for Rs 25,999, our expectations weren't fed well with that unreliable camera.

When HMD Global relaunched Nokia a year ago, it started with Nokia 6, a phone that aimed to suffice the most popular Rs 15K price segment. It was later joined by other phones from the company, but the Nokia 6 was the one that made the most buzz.

This year, Nokia has worked on the shortfalls and limitations of the phones, and has returned with a more full-grown range of smartphones. Of all the phones in its new range, the Nokia 7 Plus (with a small P) is the biggest phone Nokia has made after its comeback.

It is the only Nokia phone that has an 18:9 display, topped with a huge battery and a dual camera. The phone is priced at Rs 25,999, which sets it in the middle of value for money phones like Redmi Note 5 Pro and the OnePlus 5T.

At its price, the Nokia 7 Plus also has an added advantage of minimal competition in its segment. Sure, it's big in size, but is it good enough to score a big win for the company at that price?

Nokia 7 Plus release date and price

The Nokia 7 Plus is going to hit the market on April 30, though you can start pre-booking from April 20. The phone is priced at Rs 25,999 and will be available on Amazon, Nokia Mobile Shop and select retail outlets.

The company has been following an identical design that is carved out of a 6000 series block of aluminium. It is one of the biggest reasons why their handsets are solid. The Nokia 7 Plus is also inclined towards a similar design in a bigger form factor.

The first thing that strikes about the phone is its dual-colour accent, which in our case was black and copper. There are copper coloured accents all around the phone including the phone's edges, the outline of the display, the camera module, fingerprint sensor and of course the Nokia logo. It sets a nice contrast between the main body and the chrome linings.

The attention to detail reminds us of the good ol' Nokia days, when they had the best and unique mobile phone designs.

HMD Global has also paid attention to the body paint, that is said to be a six layer skin that gives it a matte touch and doesn’t scratch easy.

From the front, it looks like any other phone with a 6-inch plus display and 18:9 aspect ratio. There’s a subtle Nokia branding on the extreme right of the top bezel aside the front camera lens, and that’s all you can see on the front when the screen is turned off.

The rear mounted fingerprint scanner falls nicely under the forefinger, while the power/lock and volume keys on the right of the handset are easy to reach.

As we already mentioned, it has a big form factor and that can make it difficult to operate with one hand. Although single handed usage is a common issue and can be ignored. However, the metal finish on the edges is a bit sharp, something that most of my colleagues found uncomfortable when holding the phone firmly. On the contrary, some found it to be helpful as it offered a better grip, which is true.

In a nutshell, Nokia 7 Plus has a build that can bear accidental drops till an extent, sits well in the palm and has an identity of its own.

The panel looks vibrant and colourful, but the prime issue is with sunlight legibility. It looks fine indoors, but suffers under bright sunlight. Apart from this, we didn’t find any visibility issues with it.

It can be viewed from extreme angles and we didn't notice any colour shift. Even the colour reproduction is pretty accurate.

Since it’s big, sharp and well lit, content consumption and gaming isn’t an issue on this phone.