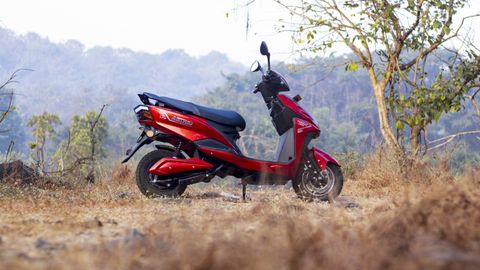 It brings us to all the wrong design choices that made it to the final Gemopai Astrid Lite. These are minor annoyances for the most part, but annoying enough to deserve mention and something that feedback can help fix with the future products.

For starters, all the controls on the dashboard are complicated to reach while riding when your hands are on the bars. For even something as necessary as honking, you’ll need to resort to hand gymnastics. One would think that having two horns switches would make matters more comfortable, but the one on the right is placed beyond the driving mode rocker. It baffles us as to why would something as commonly-used as the horn is placed in a worse position than the driving mode changing switch, which isn’t supposed to be used all the time.

And the dull dashboard we talked about earlier, doesn’t even show the remaining battery charge in percentage, but as volts. It’s not a small deal as the scale for remaining power is not linear with volts. A full charge is at 84V, with a drained battery is at about 64V. But 74V is not a 50% charge. Get why this can be so confusing? For products that have forever been held back by range anxiety, this is a big misstep. We’ve been told that newer models have made the switch to a proper percentage indicator for the battery so that we can cut Gemopai some slack.

Luckily, the remaining charge is also displayed with a total of ten bars, with each representing 10% of the battery. But even this was a little inconsistent. Just changing modes when getting off the highway would occasionally add two bars. It is understandable for ICE vehicles as range calculations are much more complicated there, but something as one-dimensional as the remaining charge should have been more accurate. We get it that the calculations are not very straightforward, but a ~20% jump in a matter of 5 seconds is a little too much.

The Astrid Lite also doesn’t have real footpegs for the pillion rider. The only resting place available for them is a triangular section behind the rider’s foot mat. Not only is this too small to rest most people’s feet, but it is also placed much ahead than where your legs naturally lie. This changes your posture and also gets your thighs to hug the rider awkwardly.

The side stand to prop up the scooter is also very inconspicuous and isn’t visible when looked at from the driver’s natural position, nor is it felt while gliding your foot across the rim of the footboard. We often had to bend out to the left to find the stand before getting off.

Before diving into the performance bits, it’s essential to understand that EVs will inherently be quicker (not faster) than an ICE vehicle. So whether you’re talking about a Tesla or a Gemopai, the fundamental rules are the same - it will accelerate faster than its petrol-powered counterpart.

The Gemopai Astrid Lite has a 2,400W motor with a peak output of 4,000W. That gives it a great oomph off the lines, but only until you hit around 20kph or so, after which it dies down rather abruptly. While the initial spurt will help you overtake slower vehicles, expect them to catch up soon the second, there’s an open space. We found this low-end grunt very useful in traffic when we had to instantly overtake a vehicle before returning to cruising in the side lane.

There are three driving modes: Economy, City, and Sports, which provide top speeds of about 35, 45, and 65, respectively. If the speedometer is anything to go by, then the scooter reaches its respective top speeds pretty quickly and effortlessly. Even cruising at the top speed didn’t feel as tiring or stressful as a regular scooter. In one lucky stretch, we were able to touch 72kmph.

Did we mention that the Gemopai Astrid Lite makes no sound or vibration? It even skips the cooling fan sounds that other electric scooters bring. It’s a very comfortable ride, or as my non-petrolhead buddy described it “feels like I am floating!”

Scooters in general fall short on are weight distribution. A huge chunk of the ‘regular’ scooters feel very rear and bottom heavy. As a result, you feel like you’re dragging something - not ideal if you are even the least bit concerned about riding dynamics or have trouble balancing.

The vehicle dynamics are spectacular with the Astrid Lite. In fact, the weight distribution felt normal, and balancing it was more natural. Part of this is most likely due to the lower weight, but it’s also because it does not have to lug around an engine and transmission inches away from the rear wheel. It makes handling and manoeuvring the scooter around town and in bends effortless and fun. It is an easy recommendation for someone who doesn’t have a lot of experience riding two-wheelers, as the learning and balancing curve is that much shorter.

All is not good, though. What it gains in the handling and balance department, it lacks stability. Partly due to the lower kerb weight (and perhaps also because of the higher center of gravity), the scooter feels very unstable at any speed. It is here when you are reminded that deep down, it is closer to a cycle with a motor. While scooters and motorcycles feel planted (as if you’re glued to the road), this just doesn’t. Slight movements can put you off. Something seemingly minor as the pillion sneezing or adjusting their position will quite clearly shudder the scooter.

The Ather 450, in comparison, is a champ in this aspect. Its batteries are placed throughout the bottom of the vehicle, distributing the weight and adding a lot of stability. Its acceleration also doesn’t die out as early as the Astrid Lite, but that is also because of a significantly more powerful engine running the show.

The different powertrain and weight distribution also give the Astrid Lite a lot more inertia, and you’ll be able to go quite far even after releasing the throttle. There’s no regenerative braking, so enjoy the extra cruises.

The Gemopai Astrid Lite has disc brakes on the front and drum brakes on the rear. The rear brakes are pretty soft and might not be adequate in case of an emergency. Thankfully, the front brakes have a lovely bite to them, and will single-handedly save the day (and you). In an unfortunate event where a car suddenly turned in front of us, and we had to brake instantly, the scooter didn’t shake or turn one bit, maintaining its orientation in a way where we could continue riding. It isn’t ubiquitous on two-wheelers, and admittedly, we didn’t expect it to be so stable while skidding.