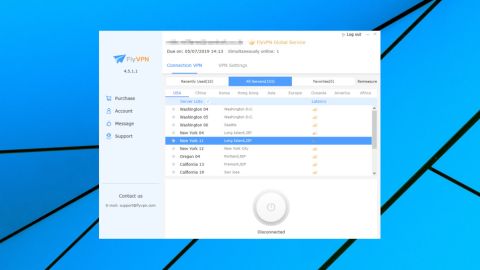 FlyVPN is easy to use, but overpriced and way too slow over long distances. The free plan might still be handy, as long as you don't mind the session logging policy.

Finding a VPN with servers in China can be a challenge, but that may be because FlyVPN has grabbed so many for itself - there are more than 40 to choose from.

The company doesn't have a lot else to boast about, unfortunately. The network elsewhere is average at 300+ servers across 30+ countries. The apps are basic, although you can at least use the service on Linux. Web support is so basic it's almost insulting - what it calls 'tutorials' are little more than download links - and despite the claim of 24/7 support, the website chat window always told us that 'our agents are not available right now' during the review.

There are at least some free options. New users get 14 days unlimited use on a mobile device. After that, you can continue to use the service for free, for one hour a day. That's three twenty-minute blocks rather than a total of shorter sessions, so it's not exactly convenient. You're also restricted to six regions: United States, Hong Kong, Korea, Thailand, Vietnam, Portugal and Turkey. Still, there's enough here to useful, and it's a simple way to get a feel for the service.

If you decide to subscribe, there are three plans: a regular shared IP account, or dedicated IPs in the USA or Korea. Pricing is the same for each, at $9.99 for a single month, dropping to $6.67 if you pay for a full year.

If that seems a little expensive, it gets worse. These plans only support connecting a single device at one time. If you want to cover, say, five simultaneous connections, the industry standard, you must spend five times as much (that's more than $30 a month on the annual plan, four or five times what you might pay elsewhere.) Uh, okay.

The company does offer a no-risk 30-day guarantee if it all goes wrong, although as we're struggling to see why you should sign up in the first place, that might not mean very much.

The good news: FlyVPN's terms of service and privacy policies are short, simple and get straight to the point. That's rare in the VPN world.

The bad news: you might not like what they have to say. FlyVPN doesn't log your internet traffic, but it collects session data including your local IP, the time you connected, the allocated VPN IP and port, and the time you disconnected.

There's no information on how long FlyVPN keeps this information, but it claims it's to allow investigation if it's believed a "violation of DMCA or SPAM policy occurs", so presumably we're talking more than a few days.

The company doesn't say whether it might share the data with investigators, but as it doesn't rule that out, either, it seems at least possible.

FlyVPN's setup was easy. Within a minute or two we had installed the Windows client, created an account, and were looking at a list of servers, along with their ping times and estimated load.

Convenient tabs allowed us to view the full server list, free servers only, recently used servers or favorites. Each server also has a latency indicator to give you an idea of its likely performance.

Settings are limited to a choice of protocol (TCP, UDP, Socks5) and the option to reconnect if the connection drops.

The free plan gave us speeds up to 16-18Mbps. The best commercial products can be four times as fast, but it's not bad for a free VPN, and usable for most tasks.

Although upgrading to FlyVPN's commercial service got us access to all its locations, it made little difference to speed. UK and major European connections were a well below average 20-25Mbps, US servers ranged from a terrible 0.5Mbps to a just-about-acceptable 20Mbps, and Asian servers averaged a similar 15Mbps.

FlyVPN is unusual in having more than 40 Chinese locations. None of these worked for us - we either couldn't connect, or they were unusably slow - but you may have a different experience if you're in, or closer to China.

FlyVPN's website unblocking performance was also very ordinary. We were able to view US-only YouTube content, but the VPN couldn't get us into BBC iPlayer or US Netflix.

The service did at least pass our leak tests, with the Windows client blocking all DNS and WebRTC leaks.

FlyVPN markets itself well, is easy to set up and use, and its free plan might be good enough for undemanding users. But the paid product is slow and horribly overpriced, and the session logging policy makes us nervous, too. Give it a miss.