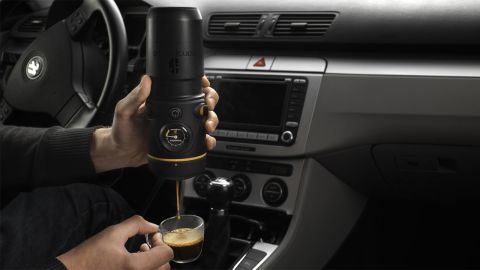 A very nice device that makes real espresso. If only that espresso was a little hotter.

Decent coffee, it's a basic human right. So, why suffer the sludge served up at motorway service stations when you can make your own piping hot, flavoursome brew in-car?

That, at least, is what the Handpresso Auto E.S.E. promises. It's a powered, self-contained and car optimised espresso machine that's claimed to provide a pukka brew in just two minutes. Sounds yummy, let's find out more.

The physicals of the Handpresso Auto E.S.E. Involve a large, motorised, pressurised and heated flask. It's powered by a standard 12 volt car socket.

It's a fairly hefty unit, weighing in at nearly a kilo. But then achieving the claimed 16 bar of pressure and in turn properly creamy espresso demands proper hardware.

The other part of the package are the so-called E.S.E. coffee pods. These are water permeable pads filled with ground coffee and analogous to tea bags that fit into the top of the Handpresso Auto E.S.E.

Handpresso gives you a choice of three pods. Straight espresso, decaf and Arabica blends. However, Handpresso claims that over 100 coffee merchant manufacture E.S.E.-compatible pods. Odds are, then, there's a pod to suit your particular espresso preference.

Brewing your first cup with the Handpresso Auto E.S.E will probably be a bit of a palaver. But that's not because there's anything difficult about it.

Nope, it's the instructions that need a polish, not the device itself. But never mind, but once you've fathomed how it all works, it's very simple indeed.

First, simply fill the reservoir with water using the level indicators to avoid overfilling (important on a pressurised device). Then pop a coffee pod on top, slip on the pressure cap, hit the power button and that's it.

You'll be greeted with about 30 seconds of motor whir as the pump pressurises the vessel. Handpresso claims the full compression and heating cycle takes two minutes. In our testing you can add at least another minute to that figure, though there was some variability.

Three audible beeps indicate the cycle is complete. You then flip the Handpresso Auto E.S.E. On it's head, push the fluid release button and pour your brew.

As for how practical it is to use, that will vary according to your car. If yours has cup holders that can accommodate the flask's 70mm circumference, then it works very well indeed. Even without cup holders, it's a pretty usable device.

First up, there's not a lot of it. A max fill is just 53ml. Enough for a single cup of espresso in other words. Fine for a lone road warrior, perhaps. Slightly annoying if you're riding shotgun.

More of an issue is temperature. Poured into a ceramic cup, the result is moderately luke warm espresso.

A plastic cup might suck less heat out of the liquid, of course. But coffee temp is an issue for the Handpresso Auto E.S.E. That's a shame because the quality of the coffee was good.

Our panel of coffee tasters diverged slightly regarding the quality of coffee delivered by Handpresso's own pods. But all agreed that it was good enough to suggest they'd likely find a suitable blend from the 100 odd makers of E.S.E. pods.

The Handpresso Auto E.S.E. Doesn't make a lot of espresso. But it is proper espresso. The only serious shortcoming in terms of coffee quality is temperature, which in our view isn't hot enough.

That said, it's a very easy to use and the £3.95 cost for 18 coffee pods means you'll be paying just 22p per cuppa. All of which makes the Handpresso Auto E.S.E. a very interesting proposition. If they could crank up the heat a little, it would be highly recommended. As it is, it's more marginal purchase.