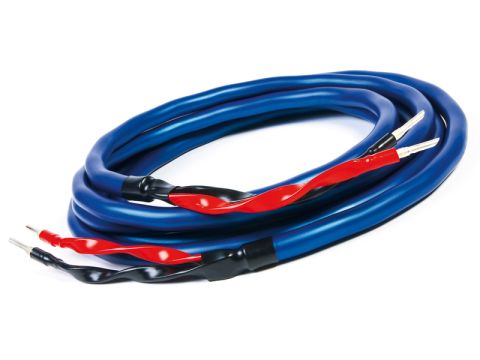 Interconnects are a slightly mellow cable which suits most systems, but can sound a little dull with older source components. Speaker cable offers excellent bass with impact, tunefulness and extension all first-rate, plus very good imaging. Awkward to handle, though.

Wireworld, like most high-end cable vendors, likes its three-letter abbreviations. In the Wireworld Oasis 6 interconnect, we are treated to both DNA and CDT – Composite Dielectric Technology. The former stands for Delineated Neutralizing Array.

Nowhere in its literature does Wireworld entirely explain what this is, but it is evidently an attempt to minimise the effects of series inductance and parallel capacitance within the cable, both of which have the ability to modify the signal.

The slightly laboured abbreviation also refers to the DNA helix which this resembles. The Oasis 6 employs a double helix of flat conductor arrays wound together.

CDT is more obvious – the cables use a mix of dielectric (insulation) materials to deliver a closer approach to ideal properties than one dielectric alone. This idea is far from new: cables using foamed plastic (a plastic and air composite) have been available for decades.

In fact, such dielectric mixes are among the very few ways in which a cables designer can genuinely reduce both inductance and capacitance, fundamentally linked by the laws of physics for a given dielectric.

But do they really damage signals? Wireworld's suggestions that they do are just the usual unproven argument about minute changes in frequency response, which in any case can be negated by impedance matching. Rather than reheat that argument, let's have a listen…

Having hooked up a familiar system with the user-friendly interconnects and cumbersome speaker cables, we are rewarded with a rather mellow sound. Yet, despite that mellowness, there's a welcome 'bite' to any kind of sound that brings with it good impact and attack when needed. Bass is strong and clear and has excellent extension.

Naturally, we were curious to find out how these results held up with various kit (sources, amps and speakers) connected via the cables, and also when each cable was partnered with other makers' wires in other parts of the system.

On average, we found the speaker cable to have the more pronounced signature and certainly its bass is a consistent feature across a range of amps and speakers, from all-valve systems to quite modest solid-state integrated amps. It's not magic and doesn't add to the extension of a small speaker, but it does ensure that low frequencies are delivered very cleanly and with good definition, helping the bass to sound natural and full of life.

We also very much enjoyed the cable's imaging, which seems particularly stable compared with a handful of products from other sources. The interconnect has much less of an obvious effect on the bass, but its treble seems more restrained than many alternatives.

This was particularly true with older source components with relatively high output impedance: we felt the sound here went beyond mellow and bordered on dull. With CD players, tuners and phono amps of recent vintage, though, it was very much more a case of 'not over-bright' rather than in any sense dull and the generally good imaging was allowed to shine through unhindered.

It does seem that the interconnect and speaker cable complement one another nicely and in every system we tried we were happy with their overall result.