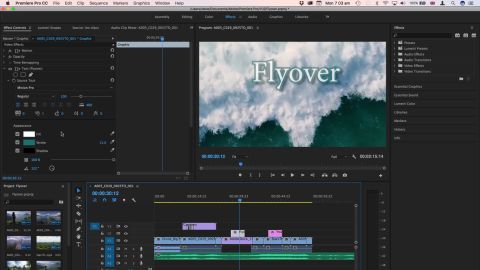 All the major changes are under the hood, but they streamline the editing process, make actions quicker, and add support for some of the latest formats. These are all highly useful updates to keep Premiere at the forefront of digital video editing.

As a professional videographer, you have a limited number of tools to choose from to craft your project into a finished product. You could opt for the granddaddy of them all, and look at the options that Avid offers. Mac users also have the choice of checking out Final Cut Pro X which packs a serious punch for its limited initial outlay.

But if you’re looking for versatility with a wide gamut of options, including access to other design apps from the same package subscription, Adobe Premiere Pro is a hard offering to beat.

Adobe Premiere has a long 26 year history on desktop computers, and it has evolved over that time to become a strong and dependable tool. Since Adobe migrated to a subscription model for all of its applications, the pace of innovation has continued at a steady pace with the advantage being that all users get to benefit from the latest features without having to think about whether upgrading is financially worth it or not. You just download the latest version and away you go.

We’ll be delving into the advantages of Adobe’s Creative Cloud in another review, but for now, our focus is on video editing.

Although the core interface of Premiere Pro itself hasn’t changed, which is an obvious advantage for seasoned editors who don’t have to learn a redesigned look and feel just to access the new features, what has been changed is going to make editing quicker and more versatile, which can only be a good thing.

First up is a new visual representation for keyboard shortcuts. Rather than display them in a list as was the case up until now, that list is complemented with a virtual keyboard displaying all the keys that currently have shortcuts applied to them. It’s a great way to make sure you don’t overlap your shortcuts or make them too close to one another, thereby creating the potential for editing errors as you work.

Something which will be a boon for many is the fact you no longer need to go into another app in order to caption your video: you can do it all from within Premiere. If anything, this should increase the number of captioned videos out there which will be of immense benefit for anyone hard of hearing – or indeed anyone needing to watch footage with the sound turned off…

Speaking of sound, the improvements to Premiere’s audio capabilities are radical. In the past, Adobe had perfected a good workflow to pass off the audio from Premiere to Audition, and back again. But going back and forth between apps can be a little daunting, and once in Audition, anyone not well versed in audio mixing tools might get easily confused by the vast array of options available.

So Adobe created the Essential Sound panel which is task orientated. You can highlight audio clips in your timeline – either individually or as a group – and manually identify them as specific types, such as dialogue, music, ambience, or SFX. From there, you will gain access to features depending on the type you’ve chosen, a neat system which makes everything more streamlined.

For instance, if you have different audio clips which have been recorded at different levels, you can select all those clips in your timeline, go to Essential Sound, and select the Auto Match button. Premiere will analyse them all and unify the levels in all of them, automatically. If you work with multiple sources of audio, or use multiple takes and different mics, this will prove to be an amazing timesaver.

Options for music clips are interesting as well, and you can retime a piece of music from the panel, but this merely speeds up or slows down the piece with all the audio distortions associated with that. If you want Adobe to analyse the music, its beat and so forth, in order to produce a new piece to match a specific duration, you can do that, but only by sending the clip or project to Audition. However, the options there are remarkably simple for such an advanced and potentially highly useful feature.

If you’re into titles and graphics, you’ll appreciate the much needed overhaul that took place in the latest incarnation of Premiere Pro. You now have the ability, for instance, to type straight onto the video, wherever the playhead happens to be. This creates a graphics clip which can be manipulated, so you can lengthen it, move it around, and so on.

The Essential Graphics panel offers up a wealth of parameters which you can alter. You can also create ‘Master Styles’ so you don’t have to reinvent the wheel each time you create a new title or caption for your project, helping to make sure they all look alike.

If you’re not into creating your own, there’s a selection of pre-built animated effects at your disposal. These are Motion Graphic Templates, which are portable, self-contained files: any graphic contained within the effect will reside inside the file itself, making it easy to share between computers. This feature is much more versatile than it might look at first glance – all these bundled effects were created in After Effects, so you can create your own templates from there which will appear in Premiere under this category.

The advantage is that while in Premiere you have limited editing capabilities (those limits are set by you or your graphic artist when creating the template in After Effects – as we’ll explore in our After Effects review). This allows you to limit what can be changed without altering the title beyond its design, giving someone not well-versed in graphic design more editing autonomy. There is hardly any limit to how much accessibility or control the After Effects graphic designer can give the Premiere editor.

It is also possible to work with these bundles within Premiere without having a full licence for After Effects, although that app must installed on the computer for this feature to work.

Other improvements in the latest Premiere Pro include ambisonic support for VR files, which means that the audio moves around as you pan across the VR clip, leading to a better, more immersive and realistic experience. Also, the application now supports new 6K formats which is incredibly useful even if you just work in HD, as it means you can zoom into a shot without degrading the quality of the video in any way.

Adobe Premiere Pro was already a powerful tool. These new improvements merely cement its position as a video editing powerhouse, offering many fresh timesaving features – indeed, you’ll wonder how you managed without these options in the past.