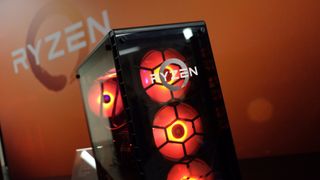 We’re still waiting for AMD Ryzen 2nd Generation processors to release this coming April, but it seems the first review has already leaked out.

According to the review, the Ryzen 7 2700X performs 14% better than the Ryzen 7 1800X when tested against a group of synthetic benchmarks including HEVC 4K to H264 1080p encoding, Mathematica, PovRay, Blender 3D, 3DSMax and Corona.

Unfortunately, it seems as gaming doesn’t see as much of a remarkable improvement, as CPC Hardware reports only a 4% improvement in gaming performance with games such as GTA V, GRID AutoSport, Battlefield 4, Arma III, X3: TC and The Witcher 3: Wild Hunt. Meanwhile, Intel processors purportedly still lead in gaming, with the Core i5 8400 and Core i5 8600K performing better than the Ryzen 2nd generation processor.

The rumored processor was supposedly tested on an entry-level A320 motherboard that doesn’t support XFR2. With that in mind, this chip could perform even better – or at least, achieve even higher core frequencies – with a X370 or X470 motherboard.

The Ryzen 2nd Generation processor launch is likely just around the corner, so stay tuned for more and our own full reviews of AMD’s forthcoming CPUs.