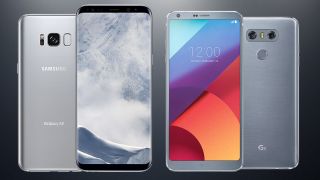 Our Samsung Galaxy S8 vs LG G6 comparison is here, to give you all the info you need to help you decide which South Korean phone maker’s new handset is best for you in 2017.

Sure, they look different in terms of design, and the internal specs aren't too similar, but the dimensions, weight, and many key features are exactly the same. Android phone buyers have a tough choice on their hands.

Here’s how the Galaxy S8 and bigger Samsung Galaxy S8 Plus stack up next to the LG G6, which, although pretty new itself, was rather overshadowed at launch as Samsung’s new handsets have hogged the limelight.

Samsung and LG are competing with phones made of glass wrapped around thin metal frames. The material is similar, but the actual designs differ to the eye and the hand.

The LG G6 has a brushed aluminum look, and its glass back is coated in order to make it less slippery. The Samsung Galaxy S8 looks and feels like slick glass.

They’re both beautiful-looking phones, with designs that virtually eliminate the top and bottom bezel, although Samsung’s curved display goes further by bending the screen around the left and right sides.

Both phones have an IP68 rating, making them dustproof and waterproof down to 1.5m for 30 minutes.

You’re getting a taller screen when you upgrade to the LG G6 or the Samsung Galaxy S8. LG uses a 18:9 display ratio, while Samsung goes a bit further with 18.5:9.

The Samsung has two sizes available, the 5.8-inch Galaxy S8 and 6.2-inch Galaxy S8 Plus. LG G6 keeps it a bit smaller with a 5.7-inch screen and a flat display; anyone who wanted a flat Samsung Galaxy S8 may find everything they need in the LG G6.

Seeing more screen is great on both – a real boon for smartphone multitasking, although your 16:9 movies will throw up black bars on the left and right. It’s not a deal-breaker on either phone, but something to bear in mind.

Samsung continues to impress with its Super AMOLED displays, and this one has better contrast ratio and Mobile HDR. LG also supports HDR10, but sticks with an IPS LCD touchscreen that looks pretty good on its own, even if Samsung has the better display technology.

Samsung’s Super AMOLED screen is more suited for the Samsung Gear VR, while LG doesn’t even support Google Daydream. Both have always-on displays that we really like.

One of the best things about upgrading your Android phone is getting the latest version of Google’s operating system: in this case Android 7.0 Nougat.

Here’s where the two phones could differ down the line. Samsung uses a more powerful chipset in its phones: the Qualcomm Snapdragon 835 in the US and Exynos 8895 everywhere else, including the UK.

LG also uses a fast chip, but not the newest one available. It’s the Qualcomm Snapdragon 821 – the same chipset found in the Google Pixel and Google Pixel XL.

Both are powerful phones right now, but Samsung’s handsets may go the distance better two or three years from now, and whenever mobile VR gaming more boldly ventures into real 3D graphics.

The LG G6 has 32GB of internal storage, while the Samsung Galaxy S8 and S8 Plus gets 64GB out of the box. Both have expandable storage via a microSD card slot and contain 4GB of RAM.

It’s always been a close-run thing between Samsung and LG when it comes to camera quality, and the 12MP Samsung Galaxy S8 and 13MP LG G6 are set to reopen the debate over who offers the best snappers.

Here’s a key difference: the LG G6 uses a dual-camera setup. One 13MP sensor is for normal shots, while the other takes wide-angle shots to get more into the frame (albeit with a bit of a fisheye effect).

Samsung skipped out on the dual-lens approach being used by many Android phones, as well as by Apple’s iPhone 7 Plus. In fact, the S8 uses last year’s Galaxy S7 and Galaxy S7 Edge sensor.

Head over to our final review of the Samsung Galaxy S8 to check out what we thought of the battery life. If you want a teaser, we were pretty pleased. As far as the LG G6 is concerned, we're still in the midst of testing that phone's battery performance. Check back soon for results.

We can tell you some good news right now though: both phones feature fast-charging technology, as well as wireless charging, something last year’s LG G5 lacked.

The LG G6 wins this battle with a cheaper smartphone that’s almost as powerful as the Samsung Galaxy S8 and S8 Plus.

In the US, the LG G6 costs anywhere from $600 to $712 at full price, althrough US carriers and LG will offer an unlocked version in the future. It may cost the normal $649 in the end.

The Samsung Galaxy S8 is the more futuristic phone, from looks to performance. Its newer chipset is better equipped for multitasking and VR gaming, and so is its taller, curved Super AMOLED screen.

However, the LG G6 has perks like a dual-lens camera and center-aligned rear fingerprint sensor. It’s also cheaper than Samsung’s phone in all regions – and many people prefer a flat, curve-free smartphone.

You can’t go wrong with either Android – they’re going to be among the best phones you can buy in 2017. But, as you can see from our Samsung Galaxy S8 vs LG G6 comparison, there are small but important differences in key areas.