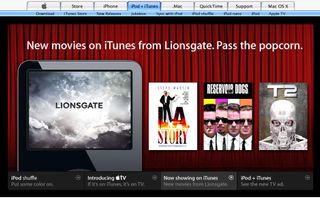 By the end of the year, UK iTunes users will be able to buy films too

Good news for those of you who have an AppleTV , or are planning to buy one. British iTunes users will finally get to buy films from the iTunes Store . Later this year all European iTunes Stores will be offering films, according to a senior Apple executive.

American iTunes users have been able to download and buy films since September last year, and now it's our turn.

Films will be added to iTunes' offerings before the end of the year, confirmed Pascal Cagni, vice president of Apple's European division, in an interview with French business newspaper Les Echos .

There's no information yet on which studios will be offering movies for download on the UK iTunes Store, or whether both US and European studios are to be signed up.

Cagni also confirmed that Apple will launch its iPhone in Europe in the fourth quarter of this year.