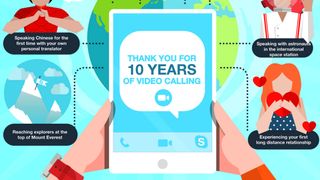 Skype is celebrating 10 years of video calling, and as part of the celebrations it has announced that it will bring group video calls to mobile devices.

The new feature will be coming to Android, iPhone, iPad and Windows 10 Mobile in the coming weeks - but Skype hasn't announced an official launch date yet.

Even though Android tablets aren't specifically mentioned on the blog, Skype has confirmed the feature will be compatible with those too. You can now also pre-register for the feature from the Skype website.

Skype confirmed to techradar that up to 25 people will be able to take part in a group video call, but there's no update on when it will be coming to devices.

This comes a few weeks after rumours of a WhatsApp video calling service appeared, although that seemed to be just for one-on-one chats.