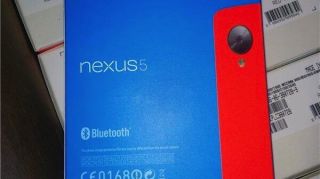 Clues are stacking up

We pick up where our fellow gadget gumshoe left off.

Another clue has stumbled into the case of the red Nexus 5. Make that a whole mess of clues, a rarity in this crazy mixed-up world of smartphone sleuthing.

By way of @artyomstar, our peepers spy a legitimate-looking Nexus 5 box, identical to the one you'd find encasing the black or white version save for the red hue of the kit on the cover.

Our tipster went one further - upon opening the box, a scarlet Nexus 5 stared us straight in the face. At first glance the stamped "Nexus" is as hard to read as a fog-shrouded street sign, but a second look reveals the lettering right where it should be.

Are we any closer to finding this handset put up in the Play Store? That, unfortunately, is a mystery for another day.