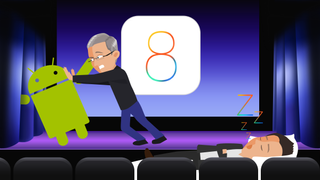 Apple's losing its excitement and individuality

When I watched the iOS 8 announcement, it was with a sense of bemusement, sadness and only the occasional 'that's nice' moments popping up in my head.

It's digested now, having had enough time to ferment in that vacant space I refer to as my brain. The jury's in - and it's not overwhelmed.

While the general consensus is the new platform is a good enough change, the iOS 8 announcement left me cold. I'd waited for signs of a revolution, one that would delete the mistakes of iOS 7 - but they never came. Quite simply, the feeling for me was that Apple has run out of ideas.

Before we go any further, NO. I am not a secret Google spy. Yes, I am running an iPhone but I had to jailbreak it to be able to enjoy it. I'm not a biased fanboy. But I just couldn't see anything there to make me jump out of my seat. And I really wanted to.

Active notifications! Purleease! Shortcuts to call most used contacts? Widgets (sort of)! This is so last year to the jailbreakers. And it just highlights Apple's problems - it's just doing what the competition has been up to for years.

Steve Jobs famously referred to Android as a stolen product (whilst forgetting the drag down notification centre wasn't entirely his invention) but everywhere I look in iOS 8, I see things that the jailbreakers have been offering for years.

There's no acknowledgement that it needs the jailbreakers - not just to be the bogeymen to Geniuses everywhere, but to keep its creative juices flowing. They'll be designing the damn iPhone next!

And let's not get started on poor WhatsApp - which has seen a few of its selling points pinched. Not that we feel sorry for Facebook after it opened its wallet and dropped a few billion on the service. But that's hardly the point.

Don't get me wrong - there were some things in that unveiling that really are great. Continuity, for example. That will be brilliant in day to day use. Homekit and Healthkit have potential, but nothing that will excite me for a while yet. It's hardly up there with Steve Jobs' Keynote back in 2007.

Apple's share price didn't rocket as iOS 8 was announced - and there's a good reason for that. Sure, I'll probably download iOS 8 come the autumn like everyone else. But I won't stay up all night to do it and smile sweetly when my 90% download falls down and forces me to start again. I'll give it as much priority as watering the plants. And that says it all.