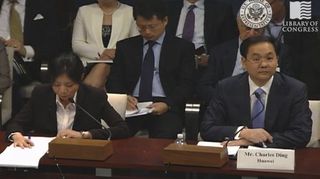 Silent for Huawei too long

Chinese phone manufacturer Huawei hasn't been shy when butting heads with U.S. and European lawmakers, but the company's founder has been much less forthright.

In fact, the reclusive Ren Zhengfei hasn't made media appearance outside of his home country in his 26 years as the head of Huawei, according to Agence France-Presse.

That all changed when he spoke to reporters in Wellington, New Zealand this week.

"Our pipe carries the data and information traffic - if the water running through the pipe is polluted, I think it is not the pipe that should be blamed," he said, defending against accusations that Huawei is an extension of the Chinese military.

"We are no longer selling our telecom equipment to telecom carriers in the U.S," Ren continued. "If, for example, the United States continues to say 'We still have this security problem,' that may prove in hindsight that the decision may not be very fact-based."

Defending his series of tubes

Ren, a former member of the People's Liberation Army, seems to have chosen New Zealand to break his silence because of the country's willingness to use Huawei's controversial equipment.

In contrast, the 68-year-old founder's company has faced strong rebuke from politicians in the West who claim that using Huawei's telecom hardware would be a national security risk.

Specifically, U.S. House of Representatives' Intelligence Committee has suggested that such equipment should be banned along with that of fellow Chinese phone manufacturer ZTE.

"We have serious concerns about Huawei and ZTE, and their connection to the communist government of China," said Chairman Mike Rogers (R-Mich.) in a press release last October.

"China is known to be the major perpetrator of cyber espionage, and Huawei and ZTE failed to alleviate serious concerns throughout this important investigation."

The media-shy Huawei founder reportedly suggested that "jealousy" could be behind this decision, according to Australia's Fairfax Media, as American lawmakers like Rogers have suggested that "American businesses should use other vendors."