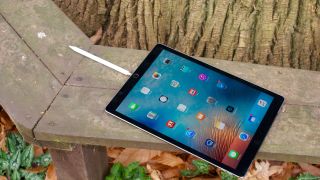 If you're waiting for Apple to release an OS X-powered version of an iPad tablet, you may want to continue holding your breath. In the meantime, Astropad's latest update will help artists and graphic designers better bridge the gap between iOS and OS X.

Unlike the dream OS X-powered iPad, you won't be able to run OS X apps, like Adobe's Photoshop and Illustrator, natively on your iPad Pro. Instead, you'll need both a Mac, and Astropad's app, and the iPad Pro will mirror the screen of your Mac onto your tablet.

The result is that creative professionals will be able to use their Adobe Creative Cloud programs on their iPad. For desktop Mac users, this solution comes close to replacing a Mac with a paired Wacom Cintiq tablet for drawing, as iPad Pro owners with Astropad can use the slate and the optional Apple Pencil to illustrate on a digital canvas.

The app promises low latency mirroring of your Mac's screen to your iPad. Low latency means that there will be lower delays in what you see on the screen, allowing for a more fluid experience for drawing.

Astropad claims you'll get 60 frames per second when mirroring, and latency is as low as 12 milliseconds, which is under half of the 32 milliseconds Apple promises with its AirPlay display mirroring technology. Astropad users can mirror their Mac's display to the iPad Pro using a Wi-Fi or a wired USB connection.

In addition to supporting the Apple Pencil, Astropad also supports other stylus, including the Pencil from Fifty Three, Adonit digital stylus and Adobe Ink. The $19 (£12, AU$26) app is now available on Apple's App Store, with prior versions garnering overwhelmingly positive user reviews.

"Astropad is the real reason why I can justify buying an iPad Pro," user Brancusi Artist said in a review. "I can finally get rid of my bulky Wacom tablet, and I can now work wirelessly from my couch doing professional work."