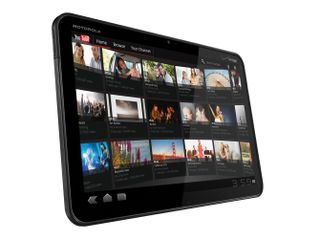 The Motorola Xoom is the first device to get Android 3.2

The latest, greatest version of Android has been spotted in the wild: the Android 3.2 update is rolling out to Motorola Xoom owners, and Google's made the Android 3.2 software development kit (SDK) available to developers too.

If you're on an Android tablet, the update should be heading your way - so here's what to expect, where it's likely to turn up and why it isn't coming to a smartphone near you.

The Android 3.2 release date is imminent

The Android 3.2 update is rolling out to the various Honeycomb devices now.

It's already headed to the Acer Iconia Tab A500.

Google promises that the Android 3.2 features will include "a variety of refinements", but to be honest there's nothing really Earth-shattering here: the most obvious new feature is the Compatibility Display Mode, which is clearly designed to address the lack of tablet-specific Android apps.

Compatibility display rescales smartphone-sized apps to tablet-friendly proportions, although if it's anything like iOS - whose 2X button essentially does the same thing - it's no substitute for apps designed with tablet-sized screens in mind.

As Google's Tim Bray puts it, "The effect is that everything is bigger, but also more pixelated" - and he urges developers to "follow our guide to supporting multiple screens so that you can also disable screen compatibility mode and provide a user experience that's optimised for large-screen devices."

If your device supports SD cards, Android 3.2's new SD Media Sync feature enables you to load media files directly from your SD card. And that's about it for the Android 3.2 features list.

Some Android 3 tablets might actually turn up now we have 3.2

Fed up waiting for the Acer Iconia A100? Wondering when the ranks of Android 3.2 tablets will include the HTC Flyer?. Shouldn't be long now.

There are no Android 3.2 phones

Android 3.2 is the latest version of Honeycomb, the tablet-focused version of Google's OS. For now Android phones are running versions 2.x, and there's no such thing as an Android 3.2 phone - however, come Ice Cream Sandwich, aka Android 4.0, the unified codebase means Android 4.0 tablets and Android 4.0 phones will share the same OS.

Liked this? Then check out ARM: low power is in our DNA