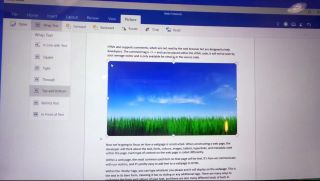 Microsoft has rolled out its cross-platform, finger-friendly build of Office for Windows that you can grab by heading to the Microsoft Store.

Available to download on the preview build of Windows 10, the Universal Office apps include Word, Excel and Powerpoint.

Like Windows 10, they have been designed to work on a wide range of devices with different resolutions, screen sizes and ratios, allowing you to continue working on documents and presentations when switching between mobile and desktop platforms.

Looking to banish Windows 8 from memory, Microsoft's upcoming OS is due to land later this year and will come pre-installed on all Windows Phones and Tablets.

While the touch-optimised offerings are meant to be used without the use of a mouse and keyboard, Microsoft confiirmed in a blog post that its desktop-based version of Office, called Office 2016, is expected to be available in the second half of 2015.

The company added that some users have been experiencing problems downloading the apps and should check back later.