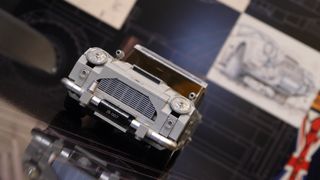 However, the Lego DB5's party piece is its fully functional passenger seat! Pull a portion of the rear bumper out, and the roof over the passenger side of the car will fold back. Release the section and you'll fire the seat out of the car. It works, and it's very cool.

Meanwhile, the machine guns hidden behind the front lights are revealed via the gear stick inside the cockpit, while rotating one of the exhausts will raise the bullet shield over the rear window.

Unsurprisingly, Lego found the ejector seat mechanism one of the most difficult aspects of creating the model, with up to 15 different prototypes made during the four month development of the whole model.

The Lego builders filmed the ejector seat in slow motion, allowing them to fine tune the mechanism to ensure the seat exited the car cleanly without catching on anything.

You'll also find a wide range of detailing on the Lego DB5, with the Aston Martin wings motive on the front and rear, a straight-six engine under the opening hood and Bond's tracking computer in the cockpit.

One aspect Lego weren't able to automate in any way were the extending tire slashers from the center of the rear wheels. You'll need to pop open the trunk and grab a couple of small extenders to manually attach for the spikes to come away from the wheels.

The set is available from today (in the UK at least), but you'll need to source your own James Bond mini-figure.