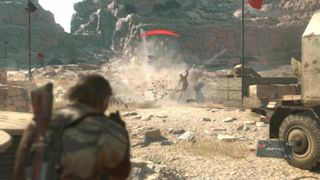 PC gamers who have spent the past few months honing their trigger finger in Metal Gear Solid 5: The Phantom Pain will be able to put their skills to the test against online competition very soon.

Konami used its Twitch channel to announce that a beta version of Metal Gear Online 3 (not to be confused with 2008's Metal Gear Online) - the online portion of MGS5: TPP - is heading to PCs at 10pm PT (6am GMT) today.

Metal Gear Online community Robert Peeler warned that the launch may slip by a few hours, so UK gamers might want to take advantage of those extra hours in bed.

The beta is being made available on Steam, where you'll see it sat in the Library after opting in. Console gamers have already been getting their hands dirty in Metal Gear Online - the online equivalent of Grand Theft Auto Online in GTA5 - since it landed on consoles in October.

The multiplayer shooter introduces new game modes including Bounty Hunter, reducing the other team's tickets by killing or capturing enemies; Cloak and Dagger, capturing a data disc before a timer expires; and Comm Control, capturing links to download enemy data.