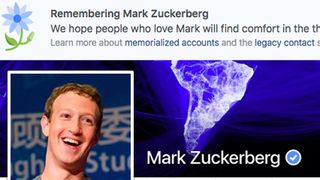 Don't panic if you've logged into Facebook this weekend only to be told you've passed away - it's the fault of a rather embarrassing bug that the social network has now fixed.

Somehow a switch got flicked that marked a large number of profiles as "memorialised", which is one of the options you can pick from for your profile after you've shuffled off this mortal coil. Even Facebook founder Mark Zuckerberg was affected by the glitch.

"This was a terrible error that we have now fixed," said a Facebook spokesperson. "We are very sorry that this happened."

Judging from the reactions on social media, most users took the temporary bug in good spirits, rather than suddenly being hit with a sense of creeping existential dread that everything had gone a bit Sixth Sense.

Delve into Facebook's settings and you can specify a "legacy contact" who manages your profile after you've kicked the bucket. Alternatively you can tell Facebook to delete your page instead once you're no longer in the land of the living.

Now the bug's been fixed we can all get back to the business of posting pictures of sunsets, baby photos and controversial political opinions.