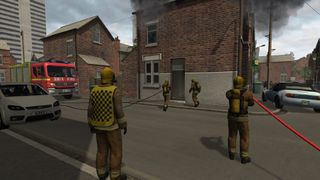 Unless you've bagged a new job as a chocolate sampler, Lego sculptor or luxury island caretaker, the first day of work training isn't generally something to get excited about.

You might accidentally trap your fingers in a till, hang up on a confused caller or drop a jalapeño pepper in an unsuspecting customer's sandwich - if you're lucky.

For trainee firefighters, the level of risk is somewhat more severe. You know - house-engulfing flames, billowing toxic smoke and crumbling 10ft walls - that sort of thing.

After strapping on the headset, which is hooked up to a Windows 8.1 laptop or Surface Pro 2 tablet running the simulation software, trainees are beamed Matrix-style into a real-world emergency scenario. But instead of bullet-time martial arts sequences, they could come up against anything from burning buildings to chemical spills or head-on vehicle collisions.

The Rift's head tracking allows trainees to look around and assess the scene, while directional movement is controlled using a Xbox 360 gamepad.

Sat beside them, a college trainer (the facilitator) takes the role of Incident Commander, spontaneously triggering incidents to test recruits' mettle and skills - from decision making and communication to risk analysis.

Trainees are judged on how they position themselves to rectify the situation and the actions that they would take, which are indicated by talking to the facilitator.

As an alternative to setting up outdoor training exercises, this method of training is far more accessible and affordable while almost equally immersive, explains Jason McClay, Head of Simulation Operations at G2G3.

"All of a sudden you're under pressure to make decisions, which gets the adrenaline going as it would in real life," he says. "The training and the theoretical elements are powerful, but this really brings them to life and allows them to practice in a real-world environment.

"There's a fairly well-defined process that firefighters have to follow and exercise while still having freedom of decision."

Other benefits include being able to sling the Rift into a bag for easy transportation, and it also costs around 100 times less than larger dome-like simulation booths called 'Igloos', which are far less mobile.

Drill footage and audio can also be recorded onto an HDD, allowing college experts to "benchmark" performances, challenge decisions and feedback to trainees.

"You can see where people are making wrong decisions or aren't quite as mature," says McClay. "The ability to rewind and replay, flag, bookmark and then store information for a later date is a key element, and it also allows us to spot trends and weakness in the training."

The simulation runs on the Unity videogame engine, which provides a graphical level of detail that allows trainees to log information such as vehicle registration plates, tax disks and house numbers.

The first version of the Rift that was used caused multiple issues that were rectified when G2G3 upgraded to second, 'Crystal Cove' development kit, accoding to McClay. "One of the problems that we've addressed to a degree in the latest build is latency," he says. "There was also a little bit of motion sickness but the latest version has allowed us to reduce that."

Another challenge the college has overcome is being able to provide training and benchmarking from remote locations, allowing firefighters to get trained up on the move.

"We have a cloud platform that allows us to deliver the simulations remotely," McClay adds. "Some trainers facilitate from a central location, while the trainees log in where they are, which makes the whole thing more accessible."

Most tech that enters the workplace only proves useful and provides value if employees are willing to give it a go, and with the Rift's Splinter Cell-style appearance combined with Call of Duty-style Xbox controls, McClay says that the new method has been a hit.

"The younger gamers pick it up straight away, but some of the older guys find that it takes a little bit of time to get familiar with the technology," he says. "They're almost looking for guns while the older ones are more focused on navigating around - the Xbox Controller isn't necessarily intuitive to everyone."

To ramp up the realism, G2G3 is looking at how to integrate the Kinect's motion capture capabilities. This would give trainees a higher level of interaction with the environment, allowing them to perform actions such as opening doors by reaching out and grabbing door handles.

The burning question is: will you be able to train as as firefighter in your socks and pants when the consumer-ready Rift eventually makes its way into homes?

"We're still early in the development process and are exploring all possible applications and avenues," says McClay. "In the immediate short term this isn't on our development path, but we certainly see opportunities for taking the product to a wider market over the medium to long term."