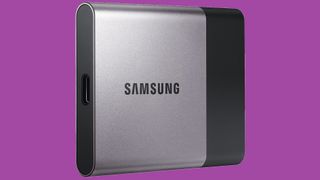 If you're feeling blue that your latest smartphone doesn't ship with a microSD card slot to store all your high resolution photos and videos, Samsung has you covered. At CES 2016, Samsung unveiled a new portable external solid state T3 drive that can deliver up to 2TB of external storage for your next laptop, PC, tablet or smartphone.

The drive utilizes Samsung's Vertical NAND (V-NAND) technology to pack in as much storage as possible into a compact space. The Samsung Portable SSD T3 fits in your palm, and Samsung claims that the drive is smaller than the average business card. The drive measuers 2.9 x 2.3 x 0.41 inches (74 x 58 x 10.5mm). It weighs under two ounces (approximately 50 grams), making it suitable for mobile professionals who need access to large amounts of data.

And unlike hard disk drives, the Portable SSD T3 is more durable. It can withstand up to 1,500G of force, survive drops up two meters and be used in extreme temperatures.

Storage for your phone

The Samsung Portable SSD T3 comes in 250GB, 500GB, 1TB or 2TB capacities. The drive can connect to mobile devices using either a USB 3.1 Type C connector or USB 2.0. Samsung states the drive will work with "the latest Android smartphones and tablets, and computers with Windows or Mac OS."

Pricing information is not yet available at this time, but the T3 is expected to ship next month in the United States, China, Korea and select European countries. It will be available worldwide at a later date.