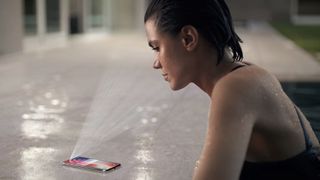 Smartphone manufacturers have spent much of this year trying to work out how to embed a fingerprint sensor under glass, and ultimately came up short. Next year the tech we'll see the most could be advanced facial recognition, similar to the Face ID system from Apple.

That's according to noted industry analyst Ming-Chi Kuo from KGI Securities, who says that Android manufacturers won't want to get left behind and are likely to react to Apple's iPhone X with improved face scanning systems of their own in 2018 and beyond.

Consumers see 3D face scanning as more of a significant upgrade, Kuo suggests, which will lead to a boost in sales for anyone who can package it in a phone. What's more, it opens up more possibilities for augmented reality features (like crazy Snapchat lenses for your face).

"3D sensing not only enables facial recognition in security applications and allows users to create fun expressions like Apple's Animoji, on a more important level, it is a key factor in the development of AR," explains Kuo, as AppleInsider reports.

Having said that, development of fingerprint sensors that can work under glass won't go away completely - Kuo says that Samsung is still on track to get some kind of working solution in place for the Galaxy Note 9 next summer. As Samsung makes its own OLED panels, it has an advantage over other Android phone makers in being able to come up with customized solutions of its own.

In the run up to the launch of the 2017 iPhones, many a rumor suggested Apple was working hard to try and get a Touch ID sensor that would work under a display, before eventually giving up and switching to Face ID instead.