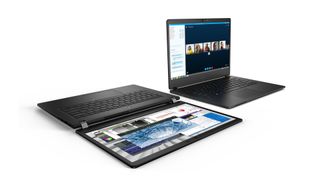 “Durable yet thin-and-light, the latest TravelMate P6 provides mobile professionals with performance they can rely on. We’re confident they’ll appreciate the ability to work for two days without having to recharge, in addition to the notebook’s military standard compliant chassis and enhanced security.”

The TravelMate P6 sports a magnesium-aluminum chassis that is stronger and lighter than standard aluminum alloys at the same thickness while weighing just 2.4 pounds and measuring only 0.6 inches. The notebook also offers up to 23 hours of battery life and can be charged up to 50 percent in less than 45 minutes. Users can even work and collaborate on the go with optional eSIM-enabled 4G LTE connectivity.

The TravelMate P6 was co-engineered with Intel as part of the chipmaker's Project Athena innovation program and the device itself underwent rigorous testing to ensure it consistently delivers the responsiveness, instant wake and battery life that mobile professionals need to work from anywhere.

“Acer’s TravelMate P6 showcases the exceptional co-engineering efforts driven by Acer and Intel through the Project Athena program. Our Intel Core processor performance and the vPro platform provides standout capability for businesses and matches the ambition of on-the-go professionals.”

Acer's new notebooks can be configured with up to 10th Gen Intel Core i7 processors, up to 24 GB DDR4 memory, up to Nvidia MX250 graphics and up to 1 TB of Gen 3 x4 PCIe SSDs using NVMe technology.

Interested users in North America and Europe will be able to pick up the TravelMate P6 in February starting at $1,149 or €1,099.