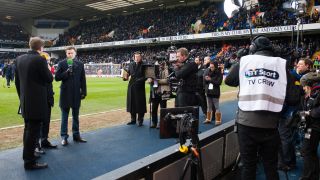 Ever since it launched in 2013, BT Sport has used technology to differentiate its product and compete with the market leader Sky Sports. Mobile streaming, 4K Ultra-High Definition (UHD) and Virtual Reality (VR) are among the innovations it has pioneered during that time.

The next stage of this evolution is 5G and remote production, technologies that promise to change both how sport is consumer and produced. Its why BT sought to move Matt Stagg over from EE to BT Sport and fill the newly created role of Director of Mobile Strategy.

“I was the only guy in the [mobile] industry who specialised in sport,” he tells TechRadar Pro. Stagg is speaking at the IBC event Amsterdam, where BT Sport is showing off one the world’s first demonstrations of multi-location live broadcasts over 5G.

EE and BT Sport conducted the first ever two way 5G broadcast back in November last year and the EE Wembley Cup became the world’s first ever sporting event to be broadcast using 5G-enabled remote production.

Since then, EE has launched 5G commercially in a number of major UK cities, promising faster, more reliable mobile broadband for consumers and businesses. However future iterations of the standard will lower latency and enable network slicing – a feature that allows operators to ringfence part of the network for a particular user in order to guarantee throughput.

These characteristics will enable a new range of business applications, but Stagg believes 5G is ready for broadcasters now. 5G not only has significantly greater capacity than 4G, but for the time being, also has relatively few users.

“From a use case point of view, broadcasting is one of the most exciting and developed [5G applications],” he says. “There are ways to develop prioritisation and to guarantee performance and reliability without network slicing.”

Remote production is a much more efficient method in producing live sports coverage. It allows BT Sport to deploy fewer camera operators to matches, allows staff to work on multiple events a day by being located at a centralised location, and it’s more rapid.

To illustrate its point, BT Sport’s coverage of the National League is now remotely produced. Stagg freely admits that the driving force behind the adoption of technology was efficiency and that he didn’t even think about the creative options.

“For me … it’s all about creativity, “ says Gemma Knight, a matchday director at BT Sport. “We can make these cameras do multiple things. For lower profile competitions like the National League that give us more access, we can interview a manager at home in the morning, go on the team bus, and then cover the game with the same camera.

“We have trust in the feed and remote production gives us a better life balance. I can wake up, have breakfast with my son, direct a match and then create a highlights show, and then put him to bed. That’s amazing.”

BT Sport makes a big deal of the fact that the National League highlights show is the earliest of any football competition in the UK, going on the air at 19:30 each Saturday, while the broadcaster has increased the number of games it shows.

Even at a Premier League ground where fibre connectivity is available and BT Sport has a greater outside broadcast presence, the use of 5G will open up a range of creative options that were hitherto impossible or impractical.

At IBC, BT showed the technology in action, linking reporters at Arsenal, Chelsea, and Manchester City’s home stadiums over 5G.

For Stagg, the demonstration highlights the benefits of being able to control every part of the content journey – from production through to distribution.

“Every step of the journey is [in-house]. We want our content to be perfect for all BT Sport customers – even if they’re on  EE or not. We can make it work on our network because we can optimise it.”

“Were the only company in the UK and one of a very few globally with a mobile network, a fixed network, a sports broadcasting division, and a media and broadcast division. We’ve got to be able to exploit these technologies and our investments.”

“There was so much going on in the sport and mobile [divisions] but [when these efforts are combined] they are a sum greater than their parts.”

All broadcasters stand to benefit. Although BT Sport is a significant internal customer, BT’s Media and Broadcast division works with the likes of the BBC and Sky.

“We have some of the best mobile people in BT [at BT Sport],” says Stagg. “We want to make sure we evolve the end radio networks to serve [our customers]. 5G is so good we’re prepared to put our content on that.”

And consumers will gain from better coverage within stadiums. Although operators and sports organisations have made several attempts to improve in-stadium connectivity, mobile networks are often overwhelmed by demand – as anyone who has ever tried to check the scores at half time can testify.

With 5G, the enhanced capacity means supporters will actually be able to access applications, including streaming, and social media. Stagg says the popularity of platforms like Instagram and Facebook had caught the industry a little by surprise and had led to a renewed focus on uplink capabilities.

It will take time for 5G to arrive around the country. EE 5G is currently available in parts of London, Edinburgh, Cardiff, Belfast, Birmingham and Manchester, with a further ten locations planned before the end of 2019.

But if you live near a National League club it might be sooner if BT needs 5G to power remote production.

“There’s an opportunity for us to influence the 5G roadmap,” says Stagg. “Fans will get a better experience as well.”