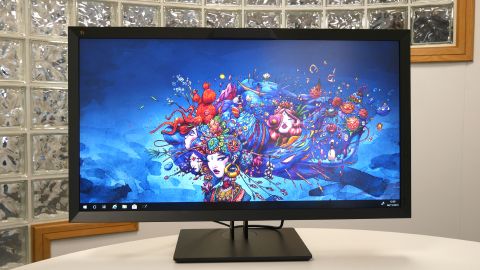 HP’s 31-inch 4K ‘Cinema’ monitor is a cutting-edge, self-calibrating content creation machine, but it comes at a serious price.

Stop. Do not be distracted by those huge bezels. HP’s awesome Dreamcolor Z31x monitor is not an early noughties throwback. In most regards, it’s a cutting-edge content creation machine based around a glorious 31-inch IPS LCD panel with a native 4K UHD resolution.

It’s not just any 4Kresolution, however. But a slightly wider 4,096 by 2,160 grid as opposed to the standard 3,840 by 2,160 pixels found in most 4K displays, making the Dreamcolor Z31x 17:9 in terms of aspect ratio rather than 16:9. It’s a resolution often used for mastering movies for theatrical release and just one of a long list of features and frills aimed at professionals and serious content creators.

The HP DreamColor Z31x’s other party trick is self-calibration courtesy of a swing-out sensor in the top bezel. However, while it does offer numerous high-end features including support for a wide range of colour spaces, it isn’t quite a total technical tour de force. In some regards, that’s fine. This isn’t a gaming monitor, so its limitation to 60Hz refresh is not a significant shortcoming.

However, HP’s omission of HDR support could be more critical, especially with a sticker price north of £2,000 and nearly $3,000 in the USA.

Of course, this is a display aimed at pros who will care a lot more about panel performance and features than fashion aesthetics. Those beefy bezels are also partly explained by an integrated calibration sensor that swings down from the top of the screen. It dictates a significant upper bezel and the rest are similarly sized, no doubt in favour of symmetry and sympathy.

If it’s an ultra-modern and super-slimline design aesthetic that you’re after, steer clear  of HP’s DreamColor Z31x. Vanishingly small bezels are the fashion these days on everything from phones to tablets and laptops. But HP has gone for an unapologetically functional vibe with the Z31x. Those are some seriously meaty bezels.

Other hardware features include a built-in KVM switch enabling the streamlined use of dual computers. As for connectivity, we’re talking two DisplayPort interfaces, two HDMI 2.0 sockets and a USB Type-C port which supports DisplayPort passthrough and charging power up to 60W. So this HP is perfect for pros who use laptops as their primary workstation and would like a single-cable solution. It also sports an ethernet port, allowing it to be configured over a network via simple HTTP access.

Whatever, that calibration tool can be used on demand to ensure calibration accuracy. It can also be set to a schedule, automatically maintaining calibration over time. Similarly, the display can be set to turn itself on and warm up to schedule, ensuring that it’s fully up to operating temp when you hit your desk in the morning. Nice.

And then there’s the panel, the glorious 31.1-inch IPS panel. For starters, it features the aforementioned 4,096 by 2,160 pixel grid, making it slightly wider than conventional 4K and capable of displaying full-resolution movie masters. Similarly, it will also run at both 50Hz and 48Hz. The latter aligns with High Frame-Rate cinema content and is also double the 24fps used by conventional films. What’s more, the Z31x has a true 2:1 pixel doubling mode allowing 2K content to be displayed pixel for pixel instead of via interpolation.

It’s also a true 10-bit panel. Most 10-bit monitors are actually 8-bit with dithering to simulate the additional colour depth. But not here, this is the real 10-bit deal. HP claims the advanced panel used in the DreamColor Z31x has both superior contrast and viewing angles to comparable IPS monitors. That’s visible in the 1,500:1 claimed static contrast ratio, though the 178-degree viewing angle specification is standard for an IPS panel.

Elsewhere, there are further features that video and movie production pros will appreciate, including the ability to overlay variable opacity mattes for 1.85 and 2.39 cinema aspect ratios and show various onscreen markers, the latter customisable via HP’s StudioCal.XML files.

The HP DreamColor Z31x may look a little dated, but goodness it’s a fine physical specimen. It feels every millimetre the premium product. That continues when you fire her up. The panel immediately informs you that a 30 minute period is required to warm up and achieve full colour accuracy.

Jump into the On Screen Display menu to start setup and the impression is similar. It’s very polished and totally comprehensive in terms of options and functionality. Indeed, it goes well beyond what most monitors offer. By way of a small example, the brightness adjustment isn’t in percentages. It’s in actual calibrated cd/m2.

Speaking of calibration, you have several options including automatic scheduled calibration using the integrated sensor. If that sounds like overkill, calibration is a fairly time consuming process, so it’s handy to be able to schedule that outside normal working hours.

As for the image quality, it’s simply superb. With the full 4,096 by 2,160 pixel resolution on a 31.1-inch panel, the pixel density is fairly high, especially for a desktop display, albeit a little short of what Apple would term a ‘Retina’ display. Still, there’s loads of detail and fonts look pretty great in Windows or MacOS.

Speaking of the latter, MacOS doesn’t offer a really ergonomic scaling option with this panel, with the options limited to native res, 3,840 by 2,160 and then a big drop to 2,048 by ,1080. Something intermediate would be optimal for most users. In Windows there are no such issues, and you can fine tune the scaling to suit your preference.

Elsewhere, the colours are utterly fabulous in native mode and it’s a doddle to jump into one of the numerous alternative calibrated colour spaces via the OSD. There’s loads of contrast on offer, too, and the viewing angles are as good as you’re going to get from an LCD-based display. Strictly speaking, even at maximum brightness, this is not an eye-poppingly bright display. But then it’s not supposed to be.

At first glance, over $2,000 / £2,000 for a 31-inch 4K monitor seems like megabucks, especially one that looks a little dated thanks to its hefty bezels. But with closer observation, it’s obvious the HP DreamColor Z31x is a seriously high quality hunk of display technology.

Serious content professionals will know exactly what functionality they need and odds are the HP DreamColor Z31x offers that, and plenty more. The integrated calibration is a very nice feature and the true Cinema 4K native resolution will be a major advantage for some content creators. It’s fully up to date in terms of offering USB-C connectivity with charging support, too.

The obvious exception to all this is the lack of HDR capability. That will be a deal breaker for some. For everyone else, the HP DreamColor Z31x actually represents very strong value given the quality and features on offer. That’s especially true when you consider the fact that its relative maturity means there are some very large savings to be had over the HP DreamColor Z31x’s standard list price.