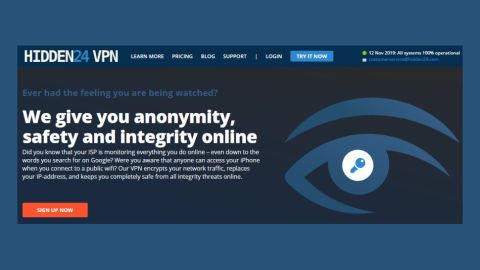 A horribly limited VPN with problems in almost every area. If you're looking for something cheap to unblock US Netflix for a week or two, though, and you don't mind the manual setup, it might be worth a try.

It's hard to stand out in the tough and competitive VPN world, but Hidden24 has found a way: it just might be the most basic service we've ever seen.

The company has no apps, for instance; you're left to set up connections manually using your operating system.

That doesn't just mean no OpenVPN support; Hidden24 can't handle IKEv2, either. Protocol options are limited to L2TP/ IPSEC or the aging and insecure PPTP.

In theory you should still be able to set it up on many different devices, but the very limited support site only has guides for Windows, Mac, Android and iOS, and a single Asus router model (RT-N66U) on the Startup page. If you're hoping to use Linux, a Chromebook, Kindle Fire or anything else, we'd recommend you get used to disappointment.

This lack of platform support maybe isn't as big a deal as you might think, though, because Hidden24 supports one just one connection per subscription. Most VPNs support at least five simultaneous connections, but Hidden24 expects you to buy separate accounts for each device.

Well, not quite. Keep in mind that you can set up Hidden24 on as many devices as you like, you just can't connect with more than one at once.

Hidden24's network is small, with only seven countries: USA, UK, France, Germany, Italy, Spain, and Sweden. There's no information on the number of servers available.

The lack of apps means there's no help with kill switches, DNS leak protection or any of the other advanced features you'll get with other VPNs. You may still be able to get some of these, but only if you figure out how to set them up on your operating system.

With so little functionality, you're unlikely to need much assistance. But if you do run into trouble, Hidden24 has no live chat support - it's strictly email-only.

For all its lack of power, the Hidden24 website still does its best to sell the service with a page listing '18 good reasons for protecting yourself with a VPN'. Unfortunately, this is distinctly short on detail, and gives a sometimes-misleading idea of what it can do.

The company suggests that if an employer tries to monitor your internet activity, for instance, using Hidden24 will make this impossible, allowing you to (for instance) look for another job without them realizing. But Hidden24 doesn't provide its own DNS service, which means a query for www.greatjobs.com will use the default DNS, and if an employer is logging those queries, it may still be able to do so.

Other points seem to say that a VPN acts as some complete protection from anyone seeing your internet searches, for instance. It certainly helps, but your searches may still be saved in your internet history, and if you're logged into a Google account, or some other service provider, they could be logged elsewhere. That's obvious to experienced users, but maybe not so much to beginners, and we'd like to see Hidden24 give a more accurate picture of what a VPN can and can't do.

That a low monthly price (the industry standard is $10-$13), though maybe still too much for Hidden24's minimal feature list. And if you're happy to sign up for a year, Private Internet Access charges just $3.33 a month, which gets you multiple apps, wide protocol support, and the ability to connect up to 10 devices simultaneously.

Trial? No, of course not; Hidden24 doesn't even have a money-back guarantee. The Terms and Conditions page explains:

'Please note that we do not offer any refunds. The reason is that because of the service we provide (making you anonymous), we cannot – and should not – log any user activity in the system. That means we have no way of knowing if a user has activated the service or not, and thus it’s not possible to offer refunds.'

That doesn't make a lot of sense to us. Why does it even matter if a user has activated the system? If Hidden24 knows they've paid at a particular date and time, it's surely possible to refund that payment, if requested within some guarantee period.

Signing up with Hidden24 is quick and easy. Choose an account username and password, enter your email address and country, hand over your cash (no PayPal, no Bitcoin, it's strictly card-only.)

After paying, the site directed us to a Getting Started page with very basic PDF setup guides for setting up the service on Windows, Macs, iOS and Android devices.

Although Hidden24 is clearly trying to make the process simple, its slightly odd terminology may leave you briefly confused. One step suggested we 'install an IP address for another country', for instance. 'Install' an IP address? We browsed the documentation, and, ah - it just means 'connect to a different server' (uk.hidden24.com, fr.hidden24.com and so on.)

We tried the Windows 10 setup instructions, and they worked without any issue. In around a minute we had used Windows' built-in VPN module (Settings > Network & Internet > VPN) to set up and save a new connection, which was then instantly accessible from the network icon in our system tray.

(We suspect most users won't have any trouble setting up Hidden24 manually, but if you're unsure, check out the Getting Started page. There's no need to sign up first, anyone can check out the PDF setup guides and see what's involved.)

Once you're up and running, Hidden24's web dashboard has all the basics you'll need to manage your account: profile information (email, username, password), subscription details, renewal options (automatic or manual), and a panel for submitting a support ticket.

That's mostly just as simple as it sounds, but ticket creation is a little smarter than we expected, with a rich text editor and the ability to attach up to 15 files of 10MB each. If you've ever been stuck with plain text windows, a fixed character limit and no file attachment abilities at all, you'll appreciate how useful that can be.

This would normally be the part of the review where we talk about the apps. But Hidden24 doesn't have any, unfortunately, which means you miss out on quite a few useful features.

With manual Windows connections, for instance, there's no desktop notification of connects or disconnects. No easy way to see your new IP. No kill switch to protect you if the connection drops, and not even an option to automatically reconnect.

If you've got some Windows experience, though, there are ways to make life a little easier.

Create a shortcut from your connection, for instance, and you can pin it to the taskbar, or maybe launch it when Windows starts to automatically connect.

Windows has its own simple client for launching network connections, too. There's not much to it - choose a connection from the list, click Connect to start, Disconnect when you're done - but it's worth knowing about. Click Start, type rasphone and press Enter to try it out.

Playing around with your connection's network properties allows you to carry out some useful tasks, too. You could disable IPv6 to reduce the chance of data leaks, for example, or choose a custom DNS server to improve your privacy, speed up browsing or add new features (malware blocking, maybe.)

None of this makes up for the features you're missing. But app-free VPN use does give you more options than you might think, although you might need some low-level device and networking knowledge to make the most of them.

Hidden24 is such a basic VPN that we weren't expecting much from our practical tests, but there were a couple of surprises.

The company's UK server managed to unblock BBC iPlayer for us, for instance. What's more, the US server also got us in to US Netflix. There are many far larger VPN providers who can't do that.

To test performance, we ran multiple checks with the benchmarking sites SpeedTest and TestMy from both UK and US locations.

Median UK speeds reached around 63Mbps on a 75Mbps line. That's only around 6-7% less than our speed with the VPN turned off, and is comparable with many other providers.

For our second test, we measured the download speed from a US location to the UK, this time on a very fast 600Mbps.

The results were very inconsistent, but we're not sure why, and so we're not going to consider it as a major black mark against Hidden24.

What we can say is that Hidden24's best median speed was 115Mbps. That's not spectacular, but it's probably good enough for most activities and devices, and local speeds - connecting from the US to US servers - should be significantly faster.

Hidden24 is a breathtakingly basic VPN with almost no functionality. We wouldn't use it for anything even faintly privacy-critical, but it could (just about) be useful as a cheap way to unblock US Netflix for a few weeks.