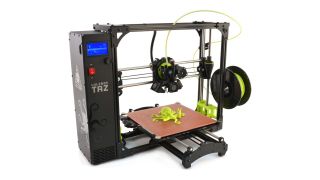 LulzBot’s distinctive 3D printers will keep being made after the owner of the brand, Aleph Objects, avoided going under thanks to an acquisition by FAME 3D.

FAME 3D (Fargo Additive Manufacturing Equipment 3D) is apparently a limited-liability corporation set up by a venture capitalist in order to buy up the assets of Aleph Objects, according to local media outlet Loveland Reporter-Herald (Aleph is based in Loveland, Colorado in the US).

Aleph Objects recently laid off the majority of its staff in what was described as a streamlining operation – only 22 employees remained out of 113, in fact, following this move which happened a month ago. All this was due to cash-flow problems, tied up with delays in product launches and expected payments that didn’t come through, according to the report.

Grant Flaharty, chief executive of Aleph Objects, said that some of those staff members who were let go will be rehired; although it isn’t yet clear how many.

Flaharty, who is now CEO of FAME 3D, commented: “LulzBot is one of the core leaders in the Desktop 3D Printing Industry. It’s an organization filled with intelligent, innovative people and solutions that are changing the opportunities for Manufacturing and Medical Markets. We couldn’t stand by and watch that type of innovation to go unrealized.”

A statement to the press also clarified that the LulzBot TAZ Workhorse, TAZ Pro, and Mini 2 (we reviewed, and liked, the original LulzBot Mini) 3D printers are still available to order right now. And furthermore that LulzBot will be making a “renewed effort on customer support and responsiveness to customer feedback”, with a view to improving these current printers, as well as future products.

So yes, future products are in the pipeline, it would seem…