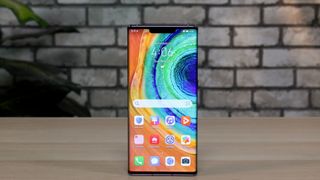 The Huawei Mate 30 Pro was announced back in September 2019, but you still can’t buy it in the UK, and there’s a good reason for that: the phone lacks Google apps and services, including the Play Store. However, if you really want to get your hands on it, you’ll soon be able to.

The phone is landing on February 20 at a cost of £899. It’s exclusively available from Carphone Warehouse and you can already register your interest.

£899 is fairly standard for a high-end flagship like the Mate 30 Pro, and actually in a sense quite reasonable when you consider that the Huawei Watch GT 2 and Huawei FreeBuds 3 are being thrown in with it (while stocks last).

But of course, you won’t get the full Android experience or the wealth of apps on the Google Play Store. That’s a point which interestingly is made quite clear on the Carphone Warehouse page, along with the claim that to make up for this there’s a ‘VIP Support Team’ on hand to help you. What exactly that entails though is unclear.

You will still be able to download apps from third-party stores, such as the Amazon App Store and Huawei’s own App Gallery, but the available selection is a lot smaller, and you’ll be locked out from things like Google Maps.

Technically the Huawei Mate 30 Pro does still run Android 10, but it’s a version with just about all the things you expect from Android stripped out of it.

Which is a shame, because the Mate 30 Pro is a hugely impressive phone in other ways. It has a stunning 6.53-inch truly edge-to-edge display, brilliant battery life from its 4,500mAh battery, a quad-lens camera with low light skills that we described as ‘class-leading’ in our review, and plenty of power.

If you’re desperate for a new Huawei flagship then, well, this is it. But for most people it’s hard to recommend, especially with the Samsung Galaxy S20 range about to launch.