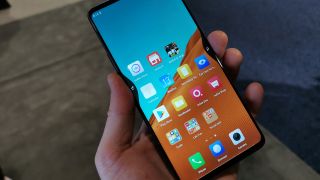 Despite a long hisotry of innovation, ZTE has long found itself stuck in the shadow of bigger rivals. The Chinese company was responsible for the first phone with an AMOLED display, and the first to use an Intel CPU.

The ZTE Nubia X (reviewed here) continues in this innovative vein, offering a second smaller color screen on the back of the device. Aliexpress is currently selling it for just over $278 (or roughly £215) with free delivery, a free case and film protectors.

The concept of duality manifests itself elsewhere on the device as well. The Nubia X boasts two fingerprint readers, two SIM card slots and the ability to use two cameras for selfies.

ZTE Nubia X - $278.03 at Aliexpress
The Nubia X is certainly different, which makes it stand out from the crowd. This is a dual-screen smartphone that is not only affordable, but also equipped with some capable components and nifty innovations like dual fingerprint readers.
View Deal

The rest of the specification places it squarely in the mid-range bracket; it uses the Snapdragon 845 with 6GB of RAM and 64GB of onboard storage. You'll also have to deal with a Chinese firmware that may have some proprietary apps that can’t be removed.

Having two touchscreen displays opens up a world of possibilities, especially for business users, but also comes with a number of potential issues.

The Nubia X's 3,800mAh battery is likely to suffer because it has to power multiple screens, and some applications may not be dual-screen compatible. Worst of all, protecting two screens from scratches and cracks at once will surely prove problematic, even with film protectors.

It's worth noting this product comes from mainland China, so will take at least a month to reach either the US or the UK (and potentially more). You may be levied a tax either directly or through the courier.