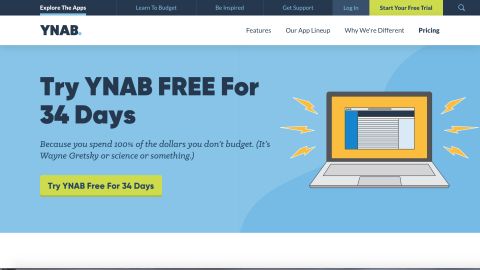 You Need a Budget (YNAB) is a very competent personal finance package that is reasonably quick and easy to use with a raft of features that let you keep tabs on incomings and outgoings.

You Need a Budget (YNAB) is a software service aimed at people who need to get their finances in order and keep them that way. It’s an online arrangement that involves a relatively straightforward series of setup steps plus features designed to sharpen up your budgeting skills.

There are new core features that allow you to connect directly to bank and credit card accounts, as well as setting yourself money management objectives with the Goals option. With setup complete all you’ll really need to do is dip in and out as you progressively build up a bigger picture of your monthly incomings and outgoings. It’s a good bet if you’re looking to save money or pay off debts.

The good news is that there is a trial version of You Need a Budget, which can be enjoyed for 34 days while you get to grips with its charms. That’s more than enough time to see how it ticks, and if you’re suitably impressed then you’ll need to sign up for the ongoing service.

The latter incidentally, gets you $59 of savings, so it’s worth considering if you think you might become a long-time user.

You Need a Budget has a deceptively potent interface that can be tailored to suit an individuals needs based on their financial picture. The whole thing revolves around your budget, and the picture of incomings and outgoings that dictates the way it ends up looking.

It’s quite nifty in that you can add a bank account and import transaction directly from there. Naturally, the way the overall financial picture alters as your new financial data gets entered into the various categories. You Need a Budget has also been spruced up and the latest version carries new features such as Age of Money (which in a way highlights how prudent you are) and also has the ability to import those direct transactions as noted above. It’s a feature that works for your credit cards too.

The overall objective, in basic terms, is to keep the screen showing green wherever there is money involved. Any areas where it has been flagged up in red shows there’s a negative balance. In that respect this visual guidance system makes You Need a Budget simplicity itself to operate.

You Need a Budget works quite happily across all of the major platforms, so if you’re a Windows, Mac, iOS or Android user there’ll be a version to suit. Being cloud-based means that You Need a Budget can be used anywhere and on any machine or device, as long as you have an internet connection.

What’s more, the data you input is stored remotely too, which means that it’s there whenever you dip back in again. The software engineers have done a nice job with the layout too, so You Need a Budget runs cleanly and without fuss, while the system uses latest encryption techniques to ensure that your data is secure.

We found You Need a Budget to be pretty simple to use, although most of the work comes during the initial setup process. This is the point where your first chunks of data need to be input into the system. Thankfully this works on what is basically a by-numbers series of steps where you need to fill in the relevant cells with your figures.

If you’re prepared to work methodically then adding costings into the various categories is easy enough, though does require patience in order to complete.

However, once you’ve got the lie of the land then You Need a Budget is the sort of software service that can be easily dipped into and updated as you roll through the year. We actually love the overall layout and usability of You Need a Budget and it’s pretty hard to get tangled up in knots if you work through the layout as it is meant to be navigated.

The area of support has to currently be one of You Need a Budget’s weakest areas and could do with some improvement. This is even more of a point when you consider the ongoing subscription charge for using the service.

There’s no phone support, which considering this is a paid-for service leaves You Need a Budget sorely lacking. There is a step-by-step guide and FAQs, which should answer many of your queries, but it would always be a bonus to be able to contact a real person for those more unusual requests. While email support is okay, it’s not quite the same, although another alternative is to consult the forums.

Again though you're not always guaranteed the information you get is going to be 100% reliable. All in all then we’d like to see this beefed up in future iterations.

You Need a Budget continues to improve with each successive release. Overall this is a solid cloud-based software solution that should help you get on top of your finances.

We are particularly smitten with the app version of the service, which gives you freedom of use no matter where you might be and emulates the desktop edition perfectly. Indeed, there are aspects of the app edition that make it rather more preferable to the desktop model. You Need a Budget’s creators seek to underline its high-grade encryption methods that protect your sensitive financial information once you’ve added it to their servers, as you would expect.

We’re also pleased to see the ability for US, along with Canadian users to be able to import data from their banks. While it’s not an accounting package per se, it certainly has value depending, of course, on whether you want to pay for the privilege of using it.