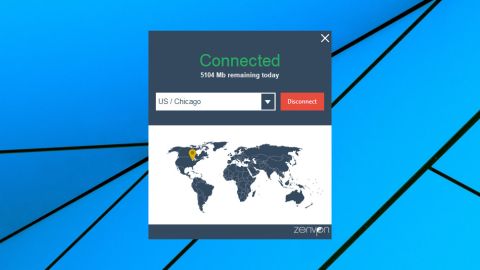 Would you pay a high price for a slow VPN with buggy clients and no features? Nope, we wouldn't, either.

Cyprus-based ZenVPN is a small VPN with a limited set of features but some unusual touches.

The company has servers in only 30 locations. That's fewer than most of the competition, but ZenVPN does at least reach out well beyond North America and Europe, with serves in Australia, Brazil, Chile, India, Indonesia, Israel, Japan, New Zealand, Singapore, South Africa and more.

The company has basic Windows and Mac clients, and an unimpressive Android app which is tagged as a beta. Still, L2TP and OpenVPN support means you should be able to use it on most devices, after a little setup work.

ZenVPN's basic plans cost $2.95 for a week, $5.95 billed monthly, or $4.16 on the annual plan. Unusually, you're limited to 5GB of bandwidth a day. Netflix suggests that's enough to stream around 5 hours of standard definition video, but only 100 minutes at HD.

Unlimited plans are much more expensive at $9.95 a month, or $7.96 if you pay annually. Many providers ask less than half that, and for a far more capable service.

Payment support is limited to cards only. Forget Bitcoin, ZenVPN doesn't even allow you to use PayPal.

It's not all bad news, though. ZenVPN provides a simple free plan which gives you 250MB data allowance a day, or around 7.5GB a month. Locations are limited to US, France, Netherlands, India and Singapore, but that could still be useful to many, and of course most providers don't have any free plans (or even trials) at all.

ZenVPN states that it doesn't log what you're doing online, but as usual, there are some potential gotchas in the small print. Like this, for instance: "We don't collect and store the logs of your internet activity but still collect certain information about you, your devices, computers and use of the service."

What information might this be, and how long is it kept? It doesn’t say, but as the company has many limited bandwidth accounts we expect it records session data: date and time of connection, some kind of device ID, bandwidth used and so on. This isn't necessarily unusual, but we'd like to know more.

ZenVPN is also distinctly short on detail about how and why it might share your data with others, though this doesn't necessarily signify a problem. There's absolutely nothing in the small print to suggest ZenVPN is doing anything dubious, it just doesn't have quite as many ‘we would never do this’ clauses as some other providers.

We did spot one detail you might not like: the 30-day money-back guarantee only applies if you've used less than 5GB of bandwidth. Even on the limited plans, that could be just one day of traffic.

Getting started with ZenVPN starts by handing over and confirming your email address. The website then offers you downloads for Windows, Mac, Android and iOS, as well as an OpenVPN configuration file you can use almost anywhere.

This apparent simplicity isn't the end of the story, though. If you do decide to part with your cash, Zen asks for a ridiculous amount of information, even if you're paying by PayPal: first name, last name, email address, physical address, your phone number. Why? We've no idea, and the privacy policy doesn't explain how this might (or might not) be used or shared.

The Windows client is very, very basic. Tap a system tray icon and a panel pops up with a world map showing your location, a plain text menu to choose something else, and a Connect/ Disconnect button. That's just about it. There are no server load figures or ping times, you don't get a Favorites system, you can't change or tweak the protocol, there's no configurable kill switch or other technology to help keep you secure.

We could perhaps forgive this if that client could handle the core essentials, but it doesn't do that, either. There are no desktop notifications to tell you when you connect and disconnect, for instance. And when we forcibly closed our OpenVPN connection, the client didn't notice or care. It continued to display its misleading 'Connected' message, even though we were unprotected and giving away our real IP.

We didn't have a lot of hope for ZenVPN in our website unblocking tests, given the major issues we'd spotted so far, but our results were a real surprise. The service successfully got us into US YouTube, BBC iPlayer, and even US Netflix couldn't stop our streaming.

Our speed tests were more disappointing, with UK performance a third of normal at 20-22Mbps, US a poor 12-15Mbps, and India struggling to reach 5Mbps. We could live with that on the free plan, but a commercial VPN should deliver much more, especially at ZenVPN's prices.

The review ended with another significant problem, as tests revealed ZenVPN's Windows client had a DNS leak. You could try to avoid some of these issues by using another client, but a safer approach might simply be to avoid ZenVPN.

ZenVPN's service is slow, short on features, with a horribly basic Windows client which has all kinds of issues. There's a major plus in its ability to unblock Netflix, but that doesn't compensate for its many problems, or justify the high price.