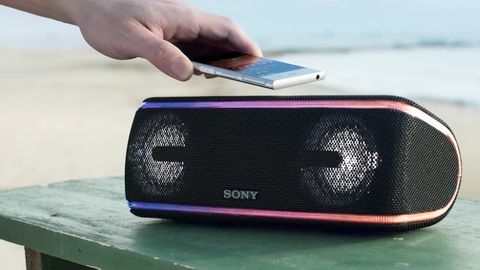 While you certainly wouldn’t go wrong picking up the Sony SRS-XB41 - especially if you’ve got plans for a day at the beach - there are other portable speakers on the market that cost a lot less and sound much better than Sony’s $249.99 (£200, AU$240) beast.

The Sony SRS-XB41 Bluetooth speaker doesn't break the mold - but, it's probably the pinnacle of the form factor. It’s big. It’s powerful. It packs more bass than you’d believe. And its battery lasts the entire day and can even charge your phone or tablet, too.

And yet, while the speaker seems to tick every box, it’s inept in one area that speakers were designed to be good at: reproducing sound.

Unfortunately, what that means is that, unless you’re adamant about bass-heavy sound and don’t care that it comes at the expense of most everything else, Sony’s latest speaker just isn’t the portable music box for you.

That said, unless you can snag the Sony SRS-XB41 for a significant discount (like the $149 deal going on over at Walmart), there are other cheaper, better sounding speakers on the market.

Sony SRS-XB41 Bluetooth Speaker: now $149 at Walmart
Big, loud and waterproof, the Sony SRS-XB41 is a tank of a Bluetooth speaker. It's well-built, long-lasting and, best of all, on sale this week at Walmart for $100 off the regular price.View Deal

Ignoring the sound quality for a second, Sony’s SRS-XB41 is really well-built. Like, exceptionally so.

To that end, you’ll be pleased to know that behind its all-mesh front grille, the XB41 is both dust- and water-resistant (IP67-certified). That means the speaker is waterproof up to a certain depth and time limit - immersion protection of up to 1 meter (or about 3 feet) of freshwater for 30 minutes.

Once you turn the speaker on, you’ll be treated to a bit of visual panache as the speaker lights up in time to whatever music is playing … well, sort of.

Despite the coolness factor of a speaker with glowing multi-color LEDs around its ring, the one problem we had was that the lightshow didn’t always flash in time with the music. A cymbal crash would happen and then, a half-second later, lights would flash, making it feel a little less than the epic coordinated lightshow we first pictured in our heads.

That said, Sony does allow you to add visual and sound effects of your own through a new feature called Party Mode. You activate it by pressing and holding the volume up and volume down buttons at the top of the speaker for three seconds. Wait for the power button to start blinking and now you can slap the back of the speaker to create chimes, dings and synth beats in time with the music.

Party Mode is one of the strangest features we’ve yet to see on a Bluetooth speaker, but it’s relatively harmless and not something we expect you’ll use very often.

Speaking of buttons, you’ll find the vast majority of controls along the top of the speaker. Here you’ll find a power, volume up/down and play/pause buttons as well as the button for the controversial Live Mode that we’ll cover more in the performance section. You’ll charge the speaker by opening up a rubber flap in the back and the speaker comes included with a 5v wall battery pack.

Design is clearly important - a speaker built out of a cardboard box with exposed wiring and impossible to access control buttons wouldn’t be much fun to use - but so is audio performance.

While the former is one of our favorite aspects of the XB41, the latter certainly was not. The reason behind that, and keep in mind that sound is, to a point, subjective, was that this thing really rocks the bass. Like, blows out the bass at the expense of everything else. To that end, the recessed mids and less-than-shimmering highs were not only hard to hear, but almost completely non-existent in the mix. The bass, with all of its mighty ferocity, completely threw the tonal balance out of whack.

Here’s the part where we’d typically say that EDM or house fans might get immense enjoyment of the bass-heavy sound - but, honestly, even that feels like a bit of a stretch. The bass is just so overwhelming that everything else just sounds muddy.

The audio performance isn't so bad that your music will feel foreign or absolutely wrong per se, but the bass bump doesn’t come without consequence to the rest of the sound. (If you’re feeling masochistic, though, you can throw it into Live Mode - a setting that attempts to give the sound an echo-y, concert-like experience - and you’ll really struggle to hear any details.)

To make matters worse, mic quality is poor and, because there’s no volume-matching software running in the background, audio often goes from listenable during music one second to a blaring cacophony of sound the next when an ad comes on. The transition is startling to say the least, and your best protection is to keep your phone in hand or, if you can, avoid ads entirely.

If there’s some silver lining here in terms of performance, it’s that the Sony SRS-XB41 has a massive battery pack inside of it that, according to Sony’s estimates puts it around 24 hours of playback. We’ve had the speaker playing for days on end and have yet to hear any indication that the battery is running low - a promising sign for those of us who can never seem to keep our gadgets charged.

The Sony SRS-XB41 will work for a very specific kind of music listener - the kind who may not necessarily care about how balanced something sounds or has ever stopped to compare what two speakers sound like side-by-side.

If that’s you, there’s no shame in that - as Sony is offering a well-built, long-lasting Bluetooth speaker that rivals the best in the business in those departments.

But if you want something that sounds better - and you don’t mind sacrificing some of the extra party-focused features to get there - there are plenty of other waterproof Bluetooth speakers just waiting to be fished off the shelf.