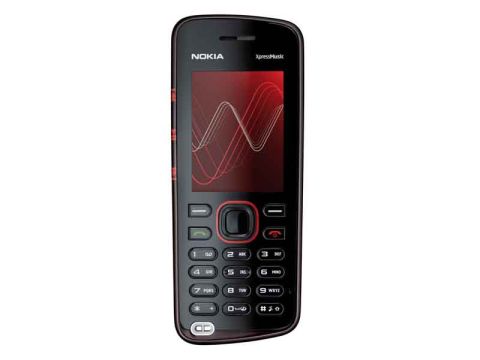 Now, with the launch of Nokia's Comes With Music unlimited music download service, and its soon-to-arrive 5800 XpressMusic touchscreen smartphone, the spotlight is starting to shine on Nokia's mobile music line-up.

But as well as the top-of-the bill devices and services, Nokia is continuing to plug away at the lower end, with the 5220 XpressMusic one of Nokia's latest low-cost newcomers.

Like the 5310 XpressMusic, Nokia's debut Comes With Music device, the 5220 doesn't have a wow-inducing set of high-end features – it lacks 3G connectivity, for instance, and has a pretty ordinary 2-megapixel camera built in.

Instead, though, the 5220 XpressMusic's appeal is based on getting the tune-playing performance right in an attractively slim design, and throwing in some decent additional features.

The XpressMusic family look is obvious on this model, with the usual black bodywork with sharply contrasting electric blue or red trim, plus dedicated music player controls lined up the side of the display. But Nokia has given the 5220 XpressMusic a very distinctive twist.

The body has an unusual asymmetrical design, with a sloping top and bottom that gives the phone a kind of funky retro-modern feel (Sagem did something similar with some of its phones back in the late 90s).

It's skinny too. Those variable sloped-shoulder dimensions work out at around 108(h) x 43.5(w) x 10.5(d) mm, and weighing a mere 78g it will slip easily into the tightest pockets. Another design touch is a strap hole in the bottom corner of the phone, for those who want to dangle rather than pocket their handset.

It has an adequate 2-inch, 256K-colour QVGA (320x240 pixels) display, and the numberpad is well designed, with well spread, slightly raised buttonry that's pleasingly responsive. It feels quite solid too, despite its glossy plastic fascia.

One very welcome touch is the inclusion of a proper 3.5mm headphone socket on the top of the phone.

While this should be normal practice for any would-be music phone, it's often overlooked, but it gives you the scope to improve audio performance significantly by simply adding better earphones.

The 5220 XpressMusic runs on Nokia's commonly used Series 40 user interface, so will be familiar to many Nokia devotees. Its standby screen has a row of changeable Active Standby shortcut icons that at a click give you fast access to key features and applications.

There are also separate information updates lined up on the screen, plus music player and FM radio status info, so you can operate these from standby with the music buttons – play/pause forward and rewind – on the edge of the phone.

Other softkey shortcuts are to hand as well, while the main menu system is typical Nokia, too, operated mainly with the phone's nicely usable central navigation pad, and with an icon-based grid structure leading you into a host of sub menus.

It's an XpressMusic phone, so the music player is of course the headline act. It can be fired up and worked by pressing the illuminated control buttons on the side, or (the long way around) by popping into the menus.

When it's playing onscreen, the central navigation pad doubles up as a control panel, in a way that's standard across Nokia handsets.

The main benefit of the dedicated controls is when the music player's running in the background; it's easier to use these than keep tapping back into the menus.

The music player doesn't break new ground for Nokia, but its menus are sensibly constructed and work efficiently.

You get familiar music player track categories (artists, albums, tracks, genres, videos, playlists), which you can scroll through to find tracks. It's easy to create your own playlists, or to tweak sounds using the equaliser functions.

Onboard storage is limited to 30MB of memory, but MicroSD cards are supported and Nokia includes a 512MB card in-box. And if you want to carry more tunes in the phone, cards of up to 2GB can be slotted in to the side.

For any music player, it's what's in the grooves that counts and the Nokia 5220 XpressMusic is capable of an excellent audio performance. With decent earphones sound is rich and detailed, with plenty of bass.

Its supplied earphones don't hit the top mark though - they're reasonable for a phone at this price level, but not exceptional. But swap these for a higher quality set of headphones (plugging into the welcome 3.5mm socket) and sound quality is really lifted, making the most of the audio processing gadgetry Nokia has built in. It's well worth trying – you don't have to spend a fortune for decent earwear that will make a big difference.

Stereo Bluetooth headphones are supported on this model too if you want a wireless option. On the other end of the tech scale, you can play back tunes surprisingly loudly via the in-built loudspeaker – though quality is typically bass-light and abrasive at higher volumes.

You can listen to the FM radio through this as well, provided the earphones are plugged in; it puts in a decent performance.

Less impressive than the 5220 XpressMusic's tune-playing abilities, its camera is a run-of-the-mill 2-megapixel shooter. There's no autofocus or flash but there is the usual tick list of standard phone tweakery and settings adjustments – white balance, colour effects, multi-shot options, and so on.

It does a reasonable shooting job within its quality limitations; colour rendition is quite good, although picture detail is limited. Indoors, image quality deteriorates and low-light performance is poor, restricted by lack of added illumination.

An option is available to upload snaps – and video - straight to online Flickr accounts, should you wish to. Video capture quality, however, is limited, with maximum shooting resolution restricted to 176x144 pixels, giving low resolution, typically stilted footage.

For a low-range phone, Nokia has given the 5220 XpressMusic a good set of additional features – with a typical bundle of pre-loaded applications and tools. Although there's a Nokia browser onboard, it has also pre-loaded the excellent Opera Mini browser, which provides a fine way of checking out full websites.

Other familiar Nokia Series 40 phone added applications include Yahoo! Go - an app that provides information updates, news, online entertainment services, mapping info and email on one homescreen - and Nokia's own WidSets widgets application – pulling together updated widgets from favourite websites and blogs on one screen.

There's no GPS capability on this handset, but thanks to Nokia Maps software, you can look up maps, search for routes and look for places of interest, with information updated over the air to the phone.

You can also download maps from Nokia's website to add to the phone's memory card, if you prefer, via Nokia Map Loader software and a USB cable supplied. And if you connect it up to an optional Bluetooth-enabled GPS module, you can use the 5220 XpressMusic for precise location finding and routing.

A Search facility – using Yahoo! or Windows Live Search engines – is another handy extra embedded in the phone's software. In addition, the usual supply of organiser tools are in place, with a calendar function, to do lists, notes, various clock and timer options, calculator, world clock and voice recorder application.

For a bit of added fun, Nokia has lined up four Java games and embedded a wallpaper creator tool.

Music may be the major key for the 5220 XpressMusic, but for voice calling it also puts in the a solid, high quality performance.

Its power usage is also not bad; Nokia reckons that in best-case network coverage users can achieve up to 5.25 hours of talktime or 406 hours of standby time. Alternatively, using the music player alone, it can run for up to 24 hours between charges.

In our tests, with average levels of usage, we managed a decent three and a bit days between charges, though naturally this declined faster if we listened to more tunes.

Anyone looking for a good quality budget music mobile should consider adding the Nokia 5220 XpressMusic to their shortlist.

Sure, it's not big on high-end features but for this price level – it's initially selling for around £90 on Virgin Mobile with a set of mini speakers thrown in – you get a decent set of useful apps and functionality for your money (even if serious camera-snappers may want to look elsewhere).

With its skinny body and quirky asymmetrical build, it has some distinctive design appeal too. But most importantly for any music-centric mobile, the 5220 XpressMusic is capable of delivering a fine audio performance that belies its price tag.