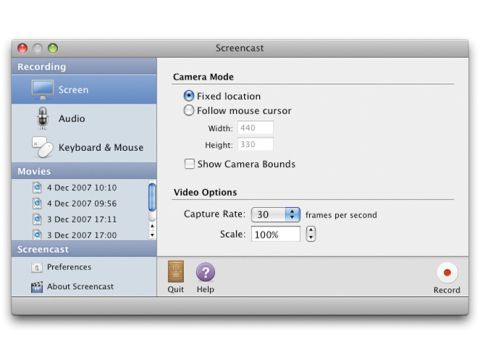 Screencast’s interface is clean and clear, and lossless copies of all videos are kept for later export.

It’s great that Screencast is challenging SnapzProX, but the latter is still the better choice

One of the most frequent questions we get asked is how you can record everything happening on your screen. Usually it’s for training or to demonstrate techniques, but it’s a handy troubleshooting tool as well. It’s a market that’s traditionally served the Mac poorly.

While Windows users have dozens of applications to do the job of capturing what’s on screen and dumping it to a video file, Mac users usually have had to rely on SnapzProX from Ambrosia Software. And while that’s a great app, it’s a little pricey at $69.

Cheap at half the price

Step forward, Screencast. At only $29, it’s less than half the price of SnapzProX, though it lacks its still-image capture abilities. Like its rival, it allows you to record your screen in a variety of ways: with a fixed camera positioned on a specific part of the screen or on the whole Desktop, or with a smaller camera that follows your cursor around the screen. You can opt to have the camera bounds shown, but we found the thick black line often crept into the video if we moved the mouse too quickly.

It can optionally show mouse clicks: you can configure how long the little expanding circle that shows clicks stays on screen, and define what colour you want right and left clicks to use. You can even flash up which keyboard shortcuts you’re using, although we found glitches with this: function keys don’t show, and commands are occasionally misdisplayed.

Worse, we sometimes got a few chunks of dropped frames even on a 1.8GHz dual-processor G5, and audio (which can be recorded via an audio input or captured from the Mac) sometimes didn’t sync with the video. Lossless videos are stored in a list in the app and can be exported with a range of QuickTime settings.

This is very definitely a first-generation product. It has a great price, lots of potential and a few teething problems that should be fixed by the time 1.5 rolls around.