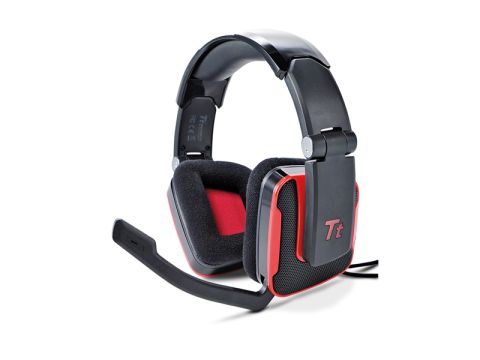 A decent gaming headset, though a trifle too focused on style over content

Just how heavy is 500g? Take our word for it: it's heavy. Not a reassuring, well-built kind of heavy, more an 'oh god my head's being crushed, get it off now' feel.

Usually ear-covering cans feel comfy and secure, and whilst the Shock One isn't the most uncomfortable headset we've come across, it creates too much pressure to wear for more than half an hour.

Also, even though your ears are fully covered, the Shock One certainly ain't noise cancelling. It sounds like you're holding seashells to both ears.

Okay, so how's the sound? Not bad. It boasts a frequency range of 20Hz- 20KHz – the full spectrum of human hearing. But despite a better bass response than Sony's DR-GA100 set the Shock One loses clarity and high-end sparkle. The £30 Sony cans do a better job with the high mids upwards, which is damning for the pricey Shock One set.

In-game, it's quite precise at pinpointing direction, but when things get chaotic there's a complete lack of definition.

But wait! This headset comes filled to the brim with extras. There's a velveteen bag to carry it around in, and some velour ear pads that do actually make the headset comfier. There's also a software suite!

I know. Finally, right? You can muck around with EQ presets or change the frequency response curve yourself, and gaze in wonder at the 'light indication' that shows you the status of the LEDs on your headset. There's also a timer, presumably for logging play time or respawn rate. Seems an odd addition, but it's useful enough.

These things may distract you from the fact you've paid more than £50 for a distinctly average headset. The Shock One doesn't have any major failings, but doesn't do a great job of justifying its price tag either. Unless you really care about carry-bags and flashy LEDs, that is.