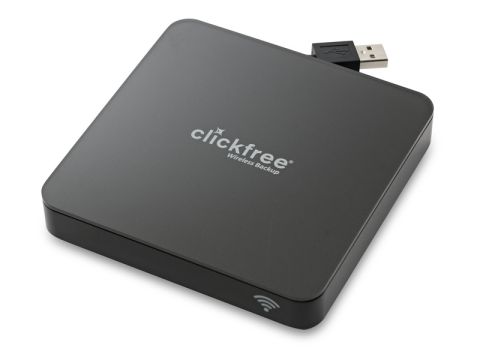 The Clickfree Automatic Backup series has an excellent reputation for simplifying the backup process, and now it's gone wireless. Clickfree Wireless Automatic Backup can cover up to 20 compatible PCs or Macs on your wireless network, and you can choose which file types to safeguard.

Available with 500GB or 1TB, Clickfree Wireless Automatic Backup is really easy to set up. Just perform an initial backup and software install using its integrated USB cable, then plug it into the mains and back up wirelessly.

A menu bar pull-down lets you manage the device, scheduling backups and restoring files. You can also back up connected drives and even iPods/iOS devices.

Ease of use comes at the cost of configurability. You can't restore recovered files to their original location on your Mac, it won't preserve different versions of an edited document and when the drive's full, it won't automatically delete the oldest files to make room for a new backup.

The software application puts an alias on your desktop that reappears on restart every time you delete it, which is especially annoying since the app can be launched from the menu bar anyway, and the interface used to recover backed-up files is clunky too.

Clickfree is a great way to safeguard treasured media and other irreplaceable files, but it should be used alongside rather than instead of a system such as Time Machine.