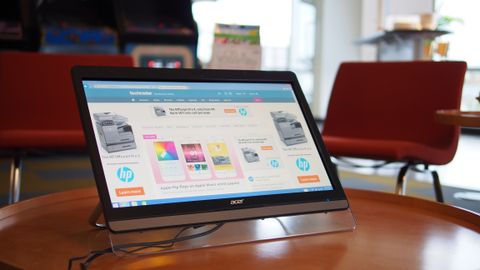 The UT220HQL is an affordable way to add touch to your computing experience, especially if you're upgrading to Windows 10.

Acer's UT220HQL ($199, £125, AU$255) is an excellent option for PC owners who want a larger display than what's available on a laptop, but also require a touchscreen. It's an easy way to add touch to an older PC or laptop to take advantage of all the gestures enabled on Windows 8, 8.1, and 10. For modern laptop owners, the built-in touch support on the UT220HQL is also a convenient way to gain the benefits of working on a larger panel without losing the touchscreen.

The UT220HQL comes fully assembled out of the box. The front is dominated by the 21.5-inch touchscreen, while a silver metal bar on the rear can be pulled down, like a kickstand, to turn the screen into an easel. The bar has quite a bit of resistance, which is good, so that you don't accidentally recline the screen to a larger angle of tilt when you touch it from the front.

The touchscreen panel is surrounded by a raised glossy black bezel, meaning that the display doesn't have a flush look with edge-to-edge glass, and this makes the design appear somewhat dated, like the discontinued Lenovo 3000 series C315 AIO from a few years ago. From a functional perspective, the beveled design makes the UT220HQL harder to wipe down and keep clean since dust can get trapped in the corners and edges between the screen and the bezel.

Just below the screen is a narrow strip of black plastic that conceals five springy hardware buttons in the center and a sixth power button on the far right side. Navigating the monitor's menus with the buttons is still tedious, requiring multiple button presses, but the presence of physical buttons is a definite upgrade over capacitive touch buttons on the BenQ EW2440 or the more discrete downward-facing buttons on the flagship S277HK.

Below the buttons is a 0.75-inch strip of dark silver that houses the speaker, and below the speaker is a long strip of lucite plastic that measures two inches wide.

The plastic makes the display appear like it's floating, but in reality makes cable management harder as you can see right through the base. I personally didn't care for the clear plastic strip on the bottom, as I felt that it makes the display look disjointed moving between the glossy black, mesh silver speaker grill and clear plastic.