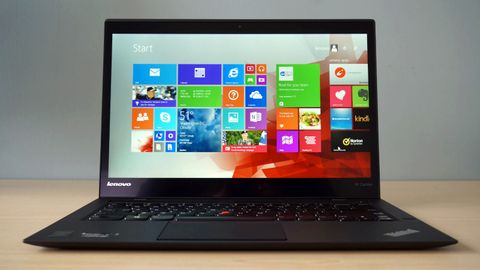 Business laptops are boring. There, I said it, and I doubt many would disagree. And judging by the looks of the new Lenovo ThinkPad X1 Carbon, the company's designers would likely nod in agreement. Lenovo has developed a knack for sexing up the business Ultrabook, for better or worse – just look at the ThinkPad Yoga.

I'm glad to report that this X1 Carbon makeover resulted in more for the better, but it's not without a few flaws. (More on those later.) Plenty has changed in laptop design since 2012, the year of the most recent X1 before this refresh, and Lenovo has clearly kept up.

In addition to shaving off a tenth of a pound and nearly the same figure in inches, the company introduced a nifty new adaptive row of keys in lieu of your standard function keys. Lenovo also slapped two USB 3.0 ports on this year's X1, stretched the clickpad by over three tenths of an inch and introduced a new mini RJ-45 Ethernet port.

But since 2012, Lenovo's competitors haven't sat idle either. Ultrabook-class workhorses like the HP ZBook 14 offering discrete graphics have hit the scene, and Apple's MacBook Pro 13-inch with Retina display sports a premium look and spec sheet to boot. The new X1 is no slouch in either regard, I found after putting it through the ringer for some time.

Upon opening the box, the iconic ThinkPad and Lenovo logos appear embossed onto the device's soft touch, carbon fiber lid. That material coats the entire frame from keyboard deck to base, though the laptop's underside is comprised of an equally smooth magnesium aluminum alloy.

The carbon fiber makes for fantastic palm rests, but is highly susceptible to fingerprints and smudges. Opening the lid reveals two wobbly hinges, although they only shake within a strict range of motion – it's impossible to push the lid open further with one hand. To instill further faith in the X1's stability, Lenovo made it so it passed eight MilSpecs tests.

Lenovo's brand new clickpad sits slightly left of center, and above the frameless, nearly flex-free keyboard is the all-new row of adaptive keys. Above that is a 2560 x 1440 IPS touch panel beset by a seamless bezel.

Both the lid and base meet to quite a thin edge when closed, making the device feel even slimmer. All in all, the X1 Carbon might topple the ThinkPad Yoga as the best-designed ThinkPad yet.

Perhaps the most noticeable and important change to the ThinkPad X1 Carbon is what Lenovo calls the Adaptive Function Row. Designed to add more utility than what the standard row of function keys can provide in such a limited space, this row of keys uses two key technologies: liquid crystal and electroluminescence.

The first is a patented technology that easily reflects light, meaning that whatever is underneath becomes more legible. In this case, that's a series of laser-etched icons on a screen-printed backlight layer. Finally, an emissive electroluminescent layer allows the backlight to shine through the icons for different colors and visibility in direct light.

These all work in tandem underneath Corning Gorilla Glass to serve up a range of unique utilities that physical function keys could never cover. Switch to Internet Explorer, Firefox, Chrome or Safari, and the row automatically changes to display functions like refresh, page navigation and opening new windows. Switch to Skype, and a host of video chat-centric functions appear instantly.

Shiny new features are nice and all, but business users care more for what's on the inside. Let's see what Lenovo managed to pack inside this super slim chassis, and for how much.