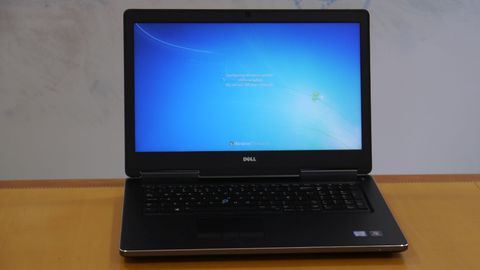 This is a solid workstation and a good performer, but we can't help but feel Dell could have done more with this notebook.

Hardware vendors have annual refresh cycles, both for consumer and professional products. While that's a fairly easy exercise for the former, trying to innovate too much with a niche professional audience can backfire – and sometimes badly.

Dell somehow took the risk and completely revisited its 17-inch workstation, although we feel the company didn't push the envelope as far as it could, maybe because it wanted to trickle improvements rather than deliver everything in one go.

The Dell Precision range could learn a trick or two from the XPS series but the shoe-in replacement of the M6800 sticks to what it does best, delivering the ultimate performance, using the best components, in a portable form factor with little regard for budget.

Since this is a 17.3-inch model, it is a sizeable laptop weighing just over 4.5kg with its 240 Watt brick-like power supply unit, and the device barely fits on an A3 (yes, A3) sheet. It's almost as thick as a ream of paper as well with a 35mm thickness.

Open it and a 17.3-inch anti-glare backlit LED – linked to the base unit via two massive hinges – welcomes you. You can opt for a full HD IPS display or a 4K IGZO panel, a £160.30 (around $230, or AU$310) option. Ours had a full HD display, glare-free with an adequate brightness and minimal screen bleed. A HD webcam and microphone array sit on the frame just above the unit.

You get a dedicated numeric keypad on the Precision 7710 but you lose the Home and End keys, and there are no dedicated function keys despite the size of this beast.

We were flabbergasted to find out that the keyboards on the XPS 13 and the Precision 7710 are almost the same size (roughly 270mm x 105mm). We understand the logic behind a compact keyboard layout on one of the world's smallest 13-inch laptops but on a 17.3-inch monster, it simply doesn't make sense, not when you have acres of space to play with.

The keys themselves are slightly curved, mushier than we were expecting with decent feedback and barely any flex. I like the rubber finish of the palm rest which uses the same material as the cover. Other than the standard normal trackpad, the 7710 also comes with a TrackPoint mouse stick, both of which are slightly eccentric. Note that both sport a middle button (the equivalent of scroll button on a mouse).

There are plenty of ports and slots as you'd expect: a memory card reader, a combo audio jack, four USB 3.0 ports, a security lock, a headphone jack, an Ethernet port, HDMI (1.4 not 2.0) and mini DP; Thunderbolt 3 and a smartcard reader are optional extras. No legacy ports are present: VGA, ExpressCard, eSATA and Firewire have been made redundant.

Flip the laptop upside-down and you will see the removable battery (either 72Whr with express charge or 91Whr) as well as plenty of air vents and a pair of speakers. Opening up the notebook is as easy as it gets and is done by removing two screws – that's great if you want to change any parts.

The whole thing is cooled via what Dell calls a "revolutionary thermal cooling system [which] takes performance and comfort to never before seen levels in a laptop". In the brief time we had with this machine in the office, we didn't notice any significant issues with power dissipation.

Designed to withstand the MIL-STD 810G certification, the Precision 7710 also sticks to ISV certification, as you'd expect from a product sporting either a Quadro or a FirePro GPU.

64GB of RAM can cost as little as £541 (around $780, or AU$1,060), but swapping it for an ECC type memory almost doubles the price. The base configuration comes with only 8GB of RAM which is likely to be restrictive for most if not all software applications the Dell Precision 7710 is expected to run.

As expected, the workstation offers multiple RAID options (RAID-0, RAID-1, RAID-5 but no RAID-0 Plus 1). Intriguingly, should you choose RAID-5, all three storage components must be an M.2 card. You can't have SATA devices, whether SSD or spinning disks. You can't actually have spinners in any RAID configuration but you can have a fast system drive coupled with a slow high capacity drive for storage.

We also tried to get a pair of 2TB drives (to reach the maximum 4TB claimed by Dell) but the configuration tool didn't allow that option, and despite the price of the device (£1,662 excluding VAT and delivery – around $2,400, or AU$3,240) and its sheer volume, there's no optical drive on the Precision 7710.

802.11ac connectivity (courtesy of Intel), Bluetooth 4.0 and optional 4G connectivity round off the specification sheet.

Dell has bundled a three-year ProSupport and Next Business Day onsite service as standard with Windows 10 Pro as the OS (and a downgrade path to Windows 7 Pro). You can also save the cost of the Windows license by going Ubuntu.

We didn't test battery life extensively but at rest, even after two hours, there was still plenty of juice – 75% to be precise – left. We suspect however that things would be very different under load and with the GPU in full swing. Note that not once did we hear the fan – but then again, the Precision 7710 was not under load.

The Dell Precision 7710 is not a bad workstation but then it is not a head-turning effort either. The competition is fierce even at this end of the market with existing (Lenovo and HP) and new (MSI) challengers so Dell engineers better be watching their backs.

The Precision 7710 feels like a compromised solution that doesn't quite deliver the goods. Sure, it is plenty powerful, has great battery life and comes with fantastic aftersales support out of the box. And there are only a handful of workstations (Lenovo ThinkPad P50, HP ZBook Studio G3) that can deliver 64GB of RAM, a Xeon CPU and a workstation-class GPU.

But it is far bigger (and heavier) than we'd like and we still don't understand why it can't be configured with two HDDs simultaneously. The layout of the keyboard – as well as its size – is also likely to attract some criticism.

Dell should take a leaf out of the XPS book (or the Alienware series) and design something strikingly different. Alas, even the smaller Precision 5510 could provide the firm with some inspiration. You can buy the Precision 7710 direct from Dell.